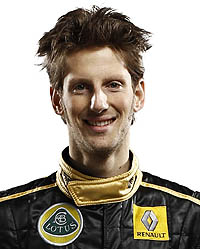 Lotus Renault GP has announced that Romain Grosjean will drive during the first practice sessions at the final two races of the season.

Having rejoined the team this year as a third driver, Grosjean, who at Spa became the only driver to win the GP2 Series twice, will now have two opportunities to get behind the wheel of the R31 when he drives Bruno Senna's car for the opening ninety minute session at next month's Abu Dhabi Grand Prix, and Vitaly Petrov's car in Brazil.

"Romain has been part of the LRGP family since February," said Eric Boullier, "and we feel this is an appropriate time to give him a chance to drive for us during two Free Practice sessions. Putting his skills to the test in two consecutive Friday sessions will offer him precious experience of driving the R31 during a race weekend and will make him a better driver. I'm sure that his feedback will be useful for the team, especially as he raced in F1 only two years ago. Since then, he has improved in every area and I'm sure he'll do a good job for us. We will be able to do this without compromising our usual Friday set-up work in any way, and as of Free Practice 2 at both race weekends, Bruno and Vitaly will return to their cars."

"I am delighted to be given this opportunity," said Grosjean, "and I feel very excited about driving the R31 for the first time during a Grand Prix weekend. It will be a big responsibility for me and my priority will be to do the best job I can for the team. I know all the team's mechanics and engineers, am familiar with the methodology and processes and I know the two tracks I'll be testing on. I also feel that the racing I did in the GP2 Series this year will stand me in good stead fitness-wise. Finally, I did some F1 testing for Pirelli during the winter at the beginning of this year, so the tyres shouldn't be too alien to me. I believe all the right elements are in place to make this a great experience, and I don't feel too much pressure going into this. My aim, of course, will be to help Lotus Renault GP prepare for the race weekends, to offer the best feedback I can and to be reliable and consistent. Getting an opportunity like this is always a massive boost in a driver's career and I'll make sure I make the most of the chance I've been given."