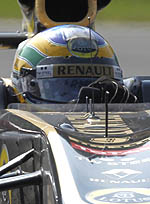 Bruno's session-ending incident midway through final practice this morning did not hinder his performance in qualifying. New front left and front right suspension was bolted onto Bruno's car in time for qualifying; it was evident that his lack of lap time throughout practice sessions this weekend did not prevent him from performing under pressure. Vitaly continued his impressive practice session form by qualifying in P9. Neither R31 completed a timed lap in Q3 after the team decided to head out at the end of the session on medium tyres (scrubs), thus ensuring both cars can begin tomorrow's race on their chosen tyre compound.

Bruno Senna: "It was a bit of a squeeze getting my car together in time for qualifying but the team did a fantastic job to mend it after my mishap in practice this morning. I haven't been able to get as much track time as I would have liked yet this weekend, however the car performed flawlessly throughout qualifying, and the strategy we deployed helped put us in a strong position for the race tomorrow. I am really looking forward to lining up on the grid, as it should be an exciting race. As I've said several times this weekend, I love this track and I am very well supported here so I hope to be able to give the supporters in the stands something to shout about."

Vitaly Petrov: "I'm pleased with lining up ninth on the grid. We are looking much stronger here than in Singapore, and we're demonstrating the potential of the R31 at high speed corner tracks once again. The car has felt progressively better each time I've taken to the wheel this weekend. It felt good in FP1 and FP2, and then FP3 this morning confirmed my sense that there will be a good opportunity for us to perform well here. The stability of the car improved around the high speed corners and the traction was better too, so I'm feeling confident going into tomorrow. A lot of different strategies will be played out during the race but I'm glad we are back in the hunt again."

How satisfied are you with the cars lining up in P8 and P9 on tomorrow's grid?
Alan Permane, Chief Race Engineer: I'm satisfied with the performance. It has been a good day although it was unfortunate that Bruno crashed this morning, which stymied his hopes of getting some good lap time before qualifying. The mechanics did a fantastic job to get the car ready in time for qualifying and he made his way comfortably through Q1 and Q2, and secured a good position on tomorrow's grid.

What was the reason behind not doing a timed lap in Q3?
AP: We decided that in a straight fight in Q3 we would have struggled to make much more ground on our positions in the top 10 - it would have been difficult to beat Schumacher anyway - so we decided to put both cars out on medium tyres (scrubs) to ensure we had the luxury of choosing our starting tyre tomorrow afternoon.

Strategically, are there now a number of options available to you tomorrow?
AP: Yes, there are. The tyre degradation is high here. Suzuka is a high grip track that is very tough on tyres, so having the flexibility to do what we want will be of great help to us. We will spend some time tonight looking at what will work best. We have a good idea of how to approach the race, but we'll look hard at the data to devise the best possible strategy to give the guys a strong chance tomorrow.