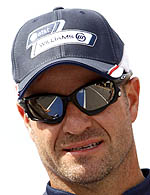 Rubens Barrichello led AT&T Williams in qualifying at the Autodromo Nazionale di Monza today, posting a time of 1:24.648 in Q2 which puts him 13th on the grid. Pastor Maldonado had a more eventful day after a KERS problem at the end of practice this morning meant the team had to work against the clock to fix his FW33 in time for Q1. After successfully getting him out on track, and with his tyres not yet up to temperature, Pastor then lost the back end of his car when deploying DRS on the exit of Parabolica and hit the barrier. After a quick front wing change, Pastor was back out to post the 11th quickest time to get through Q1. As the chequered flag came out in Q2, with both cars on soft tyres, Rubens just bettered Pastor's time to claim 13th on the grid, with Pastor 14th.

Rubens Barrichello: All in all it has been a difficult weekend in terms of performance for us, and although we would be happier further up the order, we've done better today than we thought. Starting 13th and 14th gives us hope that we can score points, so we will keep thinking positive and do our best tomorrow.

Pastor Maldonado: It was difficult for everyone in the team today. The mechanics did a great job to fix my car in time for me to get out in Q1. I then had a big moment on the first lap. The tyres weren't ready so maybe I was a little too optimistic with the rear wing and I lost the car and touched the barrier. There wasn't too much damage, mainly the front wing which we were able to change. I think we are more competitive today and the team did a great job overall with Rubens in 13th as well, so now we are looking forward to the race.

Sam Michael, Technical Director: Although we improved our pace from Friday, unfortunately it wasn't enough to get into the top ten today. However, all of our set-up is biased towards the race after we realised that we may struggle in qualifying to get the most out of the car. Rubens had an uneventful session, unlike Pastor. After a late start due to a KERS fault during morning practice, Pastor went off the track at the exit of Parabolica. This caused a lot of bodywork damage to his car that we could not fix until after the session, so his laptimes were decent considering that. They should both have good race pace tomorrow. Well done also to all the mechanics in the garage who worked flat out to get Pastor's car out on time after the KERS problem.