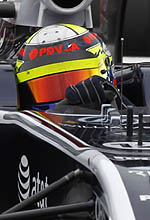 Friday marked six months to the day since the Williams F1 team floated 24% of its shares on Frankfurt's junior stock exchange, so it makes the perfect time for a mid-term review.

The upshot is far from glowing. As an article in the Sunday Telegraph, by Pitpass' business editor Christian Sylt, reveals, the Williams' shares finished trading on Friday at €15 - 38.5% down on their opening price back in March. The recent turbulence on the world's stock markets has played a part in driving this but so has the team's dire performance.

Thus far, Williams has had one of its worst ever seasons and lies in ninth place with just five points - a derisory tally for a team which was once F1's strongest force. Aero chief Jon Tomlinson and technical director Sam Michael have already paid the price for this failure by resigning and the latter will be replaced next year by disgraced former McLaren engineer Mike Coughlan. It remains to be seen whether this will improve performance though observers are sceptical about whether Williams will ever return to its previous winning ways.

Scott Garrett, former head of marketing for Williams, says "the team needs to start to compete. Not win necessarily; I do not believe they will ever have the budget for that, but to compete and to occasionally pull off the unexpected." There was hope that this would happen this year.

"I'm not too concerned about us not having scored points yet," said Williams driver Rubens Barrichello at the Spanish Grand Prix adding "we will do it, it's a certainty. What scares me a little is we had plans to win races at Williams this year - and those plans are now far, far away." Likewise, one F1 magazine wrote an extensive article about the team earlier this year and claimed that "this season, Williams believe is the first time their labours in reorganising the company will start to properly bear fruit....the result is a car about which Williams are more hopeful than they have been in years." That hope soon faded.

In July, Williams' chairman Adam Parr, who offered to resign in the wake of the team's disastrous start, admitted "our on-track performance was just so obviously inadequate that to be talking with sponsors just wouldn't have worked (earlier in the year). So I said to the marketing guys 'Just back off. Keep things ticking over for the moment because we need to put in place a vision for the future which is very different to the vision of the present'." He added that "we have some fantastic conversations going on and I'm very optimistic we will bring in some stunning new partnerships for next year."

It is hard to see how potential sponsors will get excited about a tally of just five points from 12 races. That's in addition to a crashing share price which has led to nearly €100m being wiped off the team's market capitalisation since it floated.

Garrett suggests that, in fact, this could put in motion a vicious circle as it could deter sponsors. "The sorry state of the WF1 equity price indicates a team that is more desperate than confident, and confidence is critical when presenting oneself to sponsors and asking them for money."

At the end of 2010 Williams lost six sponsors including the Royal Bank of Scotland and the Air Asia airline. Its biggest backers are now Venezuelan oil company PDVSA and telecoms giant AT&T. If they scale back, Williams' performance could stall because, according to its flotation prospectus, the team's income from prize money and its three largest sponsorship agreements "represent between 80% and 90% of the group's contracted income."

Prize money is believed to be Williams' biggest single source of revenue. It is calculated according to the teams' places in the standings at the end of the season. In 2010 Williams received an estimated $59m for finishing sixth but it would fall by $17m this year if the team remains in its current position.

Pre-tax profits for the year ending 31 December 2010 rose 28% to £5.8m on turnover which was down 16% to £91m. To prevent it from reversing further Williams is diversifying and earlier this year signed a partnership with Jaguar Land Rover which will see them jointly build the £700,000 C-X75 hybrid supercar.

Garrett believes that not all investors will be put off by the team's poor performance on the stock market. "Investors not in it for the return - fans, most likely - may continue to invest," he says. It could be a different story with corporate investors who get tired of waiting for an upswing in the share price.

The biggest casualty of the reversing share price has been Dutch investment firm Cyrte which was founded by billionaire John De Mol, of Endemol and Big Brother fame. Cyrte became the biggest single investor in the Williams flotation by buying 5% of its shares. The falling share price has severely dented Cyrte's fortunes and its stake has lost €4.7m of its value since it was acquired.