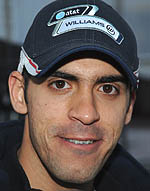 Pastor Maldonado has been handed a 5 place grid following an incident during today's qualifying session.

The Venezuelan was seen to collide with Lewis Hamilton at the end of Q2 as the two made their way down the hill from La Source on their in laps.

Minutes earlier the pair had almost collided when Hamilton, who was on a flying lap, attempted to get past the Williams driver who, along with teammate Rubens Barrichello, was trying to improve his own time and make it through to Q3.

Going down the hill at the end of the session, Maldonado passed the McLaren and then appeared to deliberately move over and hit it. Talking to his crew in the aftermath Hamilton described the move as "deliberate".

Following an investigation by the stewards, who looked at replays of the incident - including footage from on-board the McLaren - and spoke to both drivers and their representatives, both were adjudged as "causing a collision" a breech of Article 16.1 of the regulations.

The Venezuelan was handed a five-place grid penalty - meaning he will start from 21st - while the Englishman was given a reprimand.