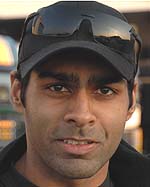 While Narain Karthikeyan is confident of lining up on the grid for his home race in October, Karun Chandhok isn't quite so sure about his chances.

Dropped following the European Grand Prix in favour of Australian hot-shot Daniel Ricciardo, Karthikeyan believes he will be back in the HRT for his home race.

"It was always a dream for me to race in Formula 1 and race in front of my home crowd," he told reporters at an event which saw tickets for the inaugural race go on sale. "And now thanks to the Jaypee Group that dream is going to be a reality."

However, Chandhok, who replaced Jarno Trulli at Lotus in Germany, isn't as confident about his chances of representing his country. "I've always maintained that racing in the German GP this year was a one-off," he said. "The team seem to be pleased with my performance at the event so we will see what happens."

Meanwhile, Sameer Gaur, MD of Jaypee Sports, dismissed speculation that the prestigious event could be targeted by local farmers unhappy with the levels of compensation paid out when the land for the facility was purchased.

"The sale of the land was finalised and completed when we acquired the land back in 2007," he said. "I'm sure that we won't have any trouble with the running of the event."