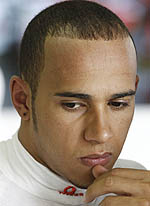 Lewis Hamilton and Jenson Button are concerned that they are off the pace of the front runners at present, putting the blame on their team's decision to launch its 2011 car later than the opposition.

While most teams had their new cars on track for the first test in Valencia, McLaren's 2011 contender didn't appear until the second test at Jerez. Speaking to reporters during a media day in Surrey yesterday, during which the he and his teammate gave journos rides in the company's new supercar, the MP4-12C, Hamilton admitted that the late launch hasn't helped.

"We left it a bit later, and perhaps it's not played right into our hands," he said, according to the BBC, while teammate Button admitted that the team hasn't had as much running in the new car as it would have liked.

"We do have four more days and hopefully things are going to run more sweetly at the next test, we get a lot of laps in, and then we can improve the base we have," said the 2009 champion.

"When I first jumped in the car my first reaction was not 'wow, we're going to blow everyone away'," he admitted. "But then I don't think anyone would have felt that because the car has a lot less downforce and the tyres are working very differently to the previous tyre."

"This car is closer to the 2009 car in the sense of downforce," said Hamilton. "The '09 car was terrible as it was hopping, three-wheeling through corners, locking up, and it had no downforce. This car doesn't lock up, it doesn't three-wheel, and it handles really nice, better than last year's car, but it just doesn't have as much downforce.

"Because the regulations have changed, it's a similar downforce level to '09," he continued. "We have a little more, but it's not far off, so it feels weak in that area. Hopefully we've more downforce coming onto the car.

"It would be fantastic to start like Ferrari has with pace, reliability, doing hundreds of laps," the 2008 champion told the Telegraph. "It is a lot easier for them from now on. We are behind on mileage and we can't catch it up on testing. But with the reliability we have had over the years I'm confident we will reach our reliability target.

"The problem is it is always difficult to catch people pace-wise. In 2007 when we arrived in Barcelona Ferrari were a tenth or two ahead and when we got to the first race in Australia they were still ahead and won it."

Last week Pitpass reported that thus far McLaren has completed 2293 miles in testing, compared to Ferrari's 3244 and Red Bull's 2738. However, with the MP4-26 not appearing until the second test this means that the new car has only completed 1598 miles in testing.