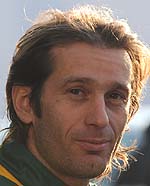 A car failure which caused Jarno Trulli to crash during this morning's test session at Barcelona, has brought Team Lotus programme to an early close.

The Italian had completed 18 laps and had just begun his fifth run of the morning when he crashed at Turn 9 (Campsa), and though the car wasn't badly damaged the team lacked the spare parts needed to continue..

"It was not his fault," said Mike Gascoyne, "it was caused by a car failure and we were missing a part we needed to put the car back together which meant we had to cut day four short.

"Despite this I still think there are a great deal of positives to take from the test in terms of the pace of the car and the fact that we are on top of the reliability issues," he continued. "With that in mind we leave here with work to do but still on target for where we want to be. We will wait to see where the next test will be held and with the time we now have back at the factory we will be working hard to make sure we run through our complete programme at that test."

"It's obviously disappointing to have the test cut short like this but these things happen in motor racing," said Trulli. "We started the day well and until the accident happened I had picked up where I left off yesterday - the car has good balance, pace we can build on and has the potential to help us take the fight to the midfield, so I'm leaving here feeling confident about the season ahead and am looking forward to the next test, wherever that will be."