Rosberg: It's a disaster 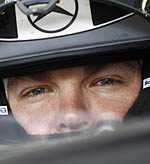 Following a disappointing performance in the European Grand Prix, despite a number of upgrades, Nico Rosberg claims his team is actually going backwards.

Despite the upgrade, which was expected to see the Brackley outfit close the gap to the pace-setters, for the first time this season neither driver made it into Q3. Subsequently, the team struggled in the race with Rosberg only bagging a point thanks to the 5s penalties handed out to Pedro de la Rosa and Vitaly Petrov.

Speaking to the Cologne Express, Rosberg admits that he fears for the remainder of the season, claiming that the main problem with the W01 is its failure to get its tyres up to optimum temperature over a single lap.

"It's a disaster," said the German. "The problem with the tyres is well known to the team. For weeks we have said we are closing in on the front, but nothing happens, in fact we go backwards.

"If you're twelfth, behind both Williams, who two weeks ago were nowhere, what do you expect?" he added. "I went from Williams to Mercedes because I thought I would have a winning car."

"We have not done a good enough job," admitted Ross Brawn. "First we need to get our new aero package working properly, and, depending on the result, we will then decide to what extent we then concentrate on next season."

Tyre problem aside, sources claim that the main stumbling block for the German team is money, with the beancounters in Stuttgart - under the watchful eye of the unions - severely limiting what funding is made available and scrutinising, down to the very last euro, what is being spent, where and how.