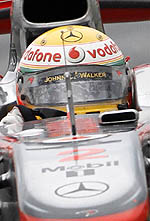 Ahead of today's sole free practice session the air temperature is 19 degrees C, while the track temperature is 21 degrees. There was rain overnight and earlier this morning. However, while it is dry now, there are a few damp patches and ominous clouds in the distance.

While Sebastian Vettel was quickest overall yesterday, it would be unwise to read too much into this. The fast straights of Montreal are likely to favour the pure grunt of the Mercedes powered cars and this was borne out in yesterday's opening session.

However, while Vettel did have the upper hand in the afternoon it was clear that he, along with everyone else, was suffering from a combination of tyre degradation and a very greasy track. While little can be done about the state of the track - there are few support events here - the tyre degradation is worrying prompting fears that we could see drivers making two stops on Sunday. On the other hand, with rain expected throughout the weekend, tyre degradation might be the least of their problems.

The options this weekend - in terms of tyres - are medium (prime) and super-soft (option).

The lights go green and Trulli - who had little running yesterday, the result of a gearbox problem - is first out, with Massa the first of the big guns to leave the pits.

Chandhok looks to be in for another difficult day. The Indian's car breaks down at the end of the pitlane and he is forced to push the car back towards the garage before his mechanics can assist him.

Seven minutes into the session, all but the Mercedes drivers have made an appearance. Trulli confirms that most of the damp patches are in the first sector.

Glock posts the first time of the day, the Virgin driver crossing the line at 1:23.593. Elsewhere, Alguersuari and Kobayashi are on track.

As Kobayashi posts 19.422, Kubica, Alonso and the two Williams drivers leave the pits.

As Kubica improves to fourth (19.169), Button begins his first flying lap of the day, the Englishman subsequently posting 19.113 to take fourth from the Pole.

At half-time, Schumacher leaves the pits but still no sign of Rosberg. Alguersuari is quickest, ahead of Kubica and Hamilton.

Next time around Hamilton goes quickest in all three sectors, crossing the line at 17.131. Button momentarily makes it a McLaren 1-2 before he is leapfrogged by Schumacher (17.687).

With twenty-five minutes remaining, Vettel, Chandhok, Webber and Rosberg are the only drivers that haven't posted times, though both Red Bulls are on track.

Vettel goes ninth with his first effort while Webber goes seventeenth. Having been demoted by Button, Schumacher retakes second to split the McLarens. Elsewhere, Kubica complains of his "tyres not working… oversteer, understeer…" you get the picture.

A 16.699 sees Button go quickest, but Hamilton is already on a hot lap going quickest in the first two sectors. The 2008 champ ultimately crosses the line at 16.259, 0.440s quicker than his teammate.

Vettel goes third with a 16.825 as Massa improves to fifth and Webber remains tenth.

No sooner has Vettel improves to second (16.671) than teammate Webber posts 17.230 to go sixth. Elsewhere, Rosberg finally leaves the pits.

Alonso improves to second with a 16.495, however, Webber is on a hot lap, the Australian going fourth with a 16.677. Rosberg has returned to the pits, having failed to post a time, the German thought to be suffering a clutch problem.