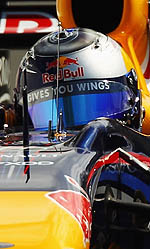 Ahead of today's second first free practice session the air temperature is 20 degrees C, while the track temperature is 25 degrees. It remains bright but with lots of cloud.

Almost everyone had an off of one kind or another this morning, several drivers claiming that the track surface is the most slippery they've ever driven on.

When the lights go green, Webber and Vettel lead the way, very rare to see both the Red Bull drivers out so early. Kobayashi, di Grassi, Senna and Petrov are also keen to get to work.

While the Red Bull duo return to the pits each having completed an installation lap, the other drivers continue round, and after a couple of minutes Hulkenberg tops the timesheets (21.606), ahead of Petrov, Kobayashi, Barrichello, Senna and di Grassi.

Eight minutes into the session Button pops up in third (20.056) as Petrov raises the benchmark with a 19.156 only to be leapfrogged by his Renault teammate who posts 18.672.

As Hamilton posts 17.522, Schumacher and Rosberg begin their first flying laps of the afternoon. Rosberg goes third (17.984), while Schumacher can only manage a 23.084. Next time around, Rosberg goes quickest with a 17.277 while teammate Schumacher posts 17.813 to go third. A 17.903 sees Liuzzi go fourth while Sutil goes seventh, which makes it six Mercedes powered cars in the top seven.

On their first flying laps, seventeen minutes into the session, the Red Bull duo go twelfth and fourteenth, with Vettel (18.939) the quicker of the two. Next time around they go eighth (Vettel) and eleventh.

All but Trulli have posted a time, the Italian still suffering form the gearbox problem that restricted his running this morning.

Tyre options this weekend are medium (prime) and super-soft (option), though we haven't seen the softer compound thus far today.

Vettel improves to second with a 17.329 while Webber posts 17.600 to go fourth, the Red Bull duo running almost in formation.

Kubica complains that it is difficult to get heat into his tyres for a flying lap. Elsewhere, Alonso goes third with a 17.518 while Vettel closes to within 0.043s of Rosberg.

As drivers focus on long runs there are no significant improvements… at which point, Vettel (option) pops in a 17.141 to go quickest by 0.010s. Next time around the German improves with a 16.877.

Massa (option) improves his time but remains seventh. Elsewhere, Alonso gets it all wrong at Turn 3 and takes to the grass. Next time around Massa improves to third with a 17.439 only to be demoted by Webber who posts 17.304.

Sutil goes quickest of all in the final sector, the Force India driver going eighth with a 17.810.

A 17.026 sees Alonso second, just 0.149s off Vettel's best. However, Webber goes quickest in the second sector, crossing the line at 17.273 but remaining third.