di Montezemolo: F1 is going through a transition 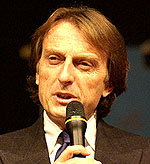 At the traditional Ferrari Christmas lunch, company president Luca di Montezemolo looked back on a "complicated" year, and forward to what he hopes will be a bright future for his team and, indeed, the sport.

"A complicated year from a political point of view is coming to an end and we now clearly want to look to the future," he told the assembled journalists. "The previous management of the FIA did a great deal of good, especially in such crucial areas as safety, but in most recent times, there were too many problems which led to serious consideration being given to Ferrari leaving Formula 1 - that was the feeling of our main board - and, along with the other teams in FOTA, there was a move towards establishing a different race series.

"I don't want to go over those old arguments now," he continued. "It is important that we were able to find common ground in order to renew the Concorde Agreement until 2012, on the basis of redefining the rules that have governed Formula 1 for so long.

"Now, in Jean Todt, we have a clever and competent person at the helm, who I am certain will know what to do to maintain constructive dialogue between the Federation, the commercial rights holder and the teams united under the FOTA umbrella. Indeed, it is this association, of which, until recently I was chairman, that played a key role in such a delicate situation, as it brought together all the teams in one organisation, as is the case in football and other professional sports.

"We are going through a transition phase and we have to work very carefully in drawing up this sport's future. Formula 1 must return to being synonymous with cutting edge technology, without an imposed egalitarianism which risks turning it into something like Formula 3.

"Of course, one has to keep an eye on the costs, but we cannot go from one extreme to the other, as someone wanted to do this year," he continued, another obvious swipe at former FIA president Max Mosley. "You only have to look at what happened with testing: in the space of three years, we went from being able to test wherever and whenever we liked, to being prevented from running the cars during the season. This resulted for example in a youngster like the Spaniard, Alguersuari, making his race weekend debut without having done even a single day's real testing in a Formula 1 car. At the moment, we can accept this situation, but it cannot be like this in the future.

"This sport must set the trends rather than follow them. For this reason, I am unhappy that various companies have quit, which should be cause for thought for many. In order to build a new Formula 1, we must work together, involving all parties, including the media. There are so many topics up for discussion: the length of the races, the timetable, access to drivers, spectacle on the track, the role of the Internet to name but a few. We have the time to do a good job, making changes where necessary, rather than just for the sake of change."