Ferrari will not stand in way of Schumacher move 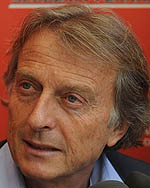 As speculation linking Michael Schumacher with a dramatic return to F1 with Mercedes mounts, Ferrari president Luca di Montezemolo has said that Ferrari will not stand in the German's way should he opt to make such a move.

The speculation, already at fever pitch, went through the roof at the weekend when German publication Bild claimed the seven-time world champion was on the verge of signing a 7 million euro deal with the Brackley outfit. Indeed, the newspaper claims the German is already in a strict training programme under the guidance of the Bad Nauheim Sport Clinic.

According to Bild, all that is preventing the deal being inked, other than a recurrence of the neck problem that prevented Schumacher replacing Felipe Massa at Ferrari this year, is for the German to be convinced that the Mercedes will be competitive.

Despite his close ties with Ferrari, with which he won five of his titles, Luca di Montezemolo is adamant that the Italian outfit will not stand in Schumacher's way should he wish to return to F1 with a rival team.

Currently, Schumacher, other than being an ambassador for the Ferrari brand, is consultant for the Italian company's road car division. Asked if the German has a binding contract with his team di Montezemolo was adamant: "No, not binding," he said.

"It's clear that if he decides to take another road our (consultancy) agreement will no longer be valid, that is logical," he told Reuters. "You can't work with a competitor and with us at the same time.

"I still haven't spoken to him about it," he added. "He is only a dear friend, not a team member. He is a consultant for our road cars."