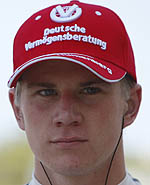 Nico Hulkenberg has revealed that following Felipe Massa's accident at the Hungaroring in July, he was approached by Ferrari with a view to replacing the Brazilian.

The German claims that other than the fact that he was focussed on the GP2 Series title - which he subsequently won - he was concerned that poor results in the Ferrari might damage his future career.

It is rare for any up and coming youngster to turn down an F1 drive, particularly with a team such as Ferrari, but at least his decision fits in with a little bit of info that came Pitpass' way recently.

Hulkenberg admits concern that poor results in the F60 would have damaged his reputation, a sad fact to which Luca Badoer and Giancarlo Fisichella can attest.

Hulkenberg is managed by Willi Weber, who just happens to manage another German driver. Could this be the same driver who, according to our sources, following a brief (secret) outing in the F60 at Mugello, is said to have claimed that driving the car would damage his reputation and similarly turned down the chance of replacing Massa?