Raikkonen: I want another title 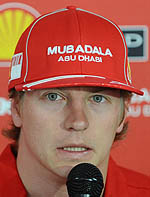 Despite the fact that he appears destined to sit-out 2010, 2007 World Champion Kimi Raikkonen insists that he hasn't turned his back on F1, indeed, he claims there is unfinished business as he is seeking another title.

In an interview with the official Formula One website, the Finn was asked about reports that he is to take a sabbatical in 2010.

"Yes, that appears to be the case," he said. "I could not agree terms with McLaren so I have decided to take a one-year sabbatical."

"I felt McLaren offered the best opportunity to win races and challenge for the drivers' championship," he added, "and if that would not work the one-year break is the result. To be honest, I will only return in 2011 if a competitive drive is available. I do not want to race just to make up the numbers. That does not interest me. But there's a lot of time until then, so let's wait and see what happens in the months ahead.

"I have enjoyed my time in F1 and I still have ambitions," he added. "In the right circumstances I am very keen to return. The door is open. Let's see what the future brings. I achieved my dream of winning the drivers' world championship. I would like to win another championship, but I can only do that if I have a competitive car. It's that simple."

Asked how he will spend next year, the Finn replied: "I do not know yet. I will look at competing in rallying. Again, naturally I want to drive a competitive car. If not I will spend more time with my family and friends."

There have been reports that there is still a possibility of joining Mercedes, however, the Finn isn't so sure. "I have not held talks with Brawn," he said of the 2009 championship winning team which was essentially bought out by Mercedes on Monday. "I feel they will run two German drivers next year now that Mercedes are involved."