Brawn: Button's future is with our team 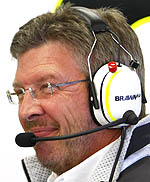 Although much of the mainstream media believes the deal which sees Jenson Button join Lewis Hamilton at McLaren is done and dusted, Ross Brawn is confident that it isn't and urges the 2009 champion to remain at Brackley.

While speculation reaches fever pitch, with some claiming that Button and Brawn have failed to reach an agreement over money, the Brackley boss has maintained a dignified silence. However, as he prepares to head off on a fishing holiday he told the Independent that he believes the 2009 champ would be best served by sticking with the team with which he won the title.

"Negotiations are continuing and the reports that he has already agreed terms with McLaren are not helpful," said Brawn. "I would be amazed if that were the case.

"His best future is with our team," he added, "where he has a good group around him, and there's a lot to be said for that. The logical thing would be for him to stay with us, but of course logic doesn't always prevail."

Having taken a significant pay cut this season, Button will rightly want to cash in on his championship success in 2010. However, even though the Brackley outfit has now been bought out by Mercedes, the team has no intention of 'splashing the cash'.

Only yesterday, Nick Fry told the BBC that despite Mercedes investment in the team there was no intention of upping the offer to Button in order to keep him on board.

"We want Jenson to be with us but we have to recognise that Formula One is not divorced from the rest of the world," he said. "We work within a budget and if we spend the money in one area, we can't spend it in another."

It is understood that Brawn has offered Button around £4m a year together with freedom to arrange his own personal sponsorship deals. McLaren, on the other hand, would offer a higher basic salary but tend to restrict drivers when it comes to outside deals.