Ross Brawn to have say on drivers 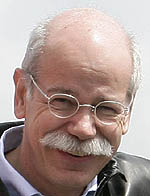 Following his company's purchase of 75.1 percent of the Brawn GP team, Daimler chairman Dieter Zetsche (right) insists that Ross Brawn will have a say on the team's driver line-up.

While much of the media appears to have decided that Mercedes Grand Prix will consist of Nico Rosberg and Nick Heidfeld, with Jenson Button heading to Woking to join McLaren, Zetsche insists that Brawn will have a major input when it comes to deciding the line-up for 2010.

"Ross Brawn is the boss of the team and it would not be smart for us to dictate to him anything like a driver decision," he told reporters. "We will talk and listen to what he wants to do and typically agree."

Mercedes Motorsport boss Norbert Haug was also keen to play down speculation that Mercedes - 75 years on from the Silvers Arrows - is seeking an all-German line-up.

"This will be an international team like Mercedes is a global player," he said. "If you look back in our history we very often have been criticised for not having a German driver so we were always open and we took the driver decision always together with McLaren. And this will be the same in the future. We want to have the best ones and we definitely do not want to have the pure German team or whatever. It is an international Silver Arrows team."

Asked when the team might announce its drivers, Haug replied: "I would rather hope next week but don't kill me if it is a couple of weeks longer. I would like to say definitely this year."