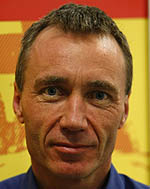 Bob, the team took a big step forward in Germany. What do you feel made the difference?
The upgrades we introduced certainly improved the aerodynamic and mechanical performance of the car and allowed us to be much more competitive. When you develop the car to a level where the drivers feel really comfortable and confident with it, you often get a lot more gains than you would expect from the sum of those parts on paper. I think we saw a good example of that at the Nürburgring and Fernando in particular was able to raise his game and get the most from the new parts that he had on his car.

Despite coming away from Germany with just two points, the R29 was the fastest car in the race. You must be optimistic for the rest of the season…
It is encouraging, but we need to be cautious and not get too excited by a single performance. We now need to go to Hungary and consolidate that performance improvement to confirm that the pace of the car is genuine and not simply due to unique circumstances in Germany, such as the track conditions or tyre performance.

Will there be more updates in Hungary?
In Germany we only had the new updates on Fernando's car, but next weekend Nelson will have the same upgrades as Fernando. There will also be some more bodywork updates that should take us another step further forward. Hungary will also give us more time to optimise all the previous upgrades in terms of car set-up, so I expect to see further benefits coming from the upgrade package we introduced in Germany.

Is the tight and twisty nature of the Hungaroring likely to suit the R29?
The problems we have been experiencing with the car in the first half of the year have not been related to specific circuit characteristics and are more general as we were lacking a little bit of performance in all areas of the car. To some extent those deficiencies have been corrected by the recent upgrades and so there's no reason why we can't produce a similar level of performance in Hungary as we did in Germany. The Hungaroring is also a circuit Fernando enjoys and has always gone well at so I think he can be competitive again.