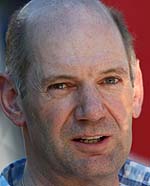 RB5 was good enough to give the Brawn a run for its money even before the scramble to produce a double diffuser. How much did the work involved in fitting a double diffuser to our car upset the planned development programme?
It was a huge amount of work as the car wasn't designed to work with a double diffuser and, in particular, it wasn't an easy marriage with the pullrod rear suspension. We decided we didn't have the resources to redesign the gearbox and rear suspension to better suit the double diffuser concept, so we kept the existing mechanical package and adapt as best we could. The first attempt was our Monaco package, which was a small step that didn't work as well as we would have liked. The second step was then introduced for the British Grand Prix.

Did this affect the overall development programme of the car?
It took up a lot of my time and during that intensive two month period I was less involved with the rest of the car than I would normally have been. But we were able to handle our usual development in parallel.

Red Bull Racing and indeed all the other teams, have brought in new developments with no testing. Does this mean that testing has been something of a red herring over the past years or would this year's cars be much quicker if testing had continued as before?
It's difficult to say. When you introduce something without testing, you are reliant on your research tools: wind tunnel testing primarily, CFD and simulation to a lesser extent. As we are now introducing new elements at race weekends, if we have stepped in the wrong direction by a small amount, it's hard to notice, as we are unable to do back-to-back testing to quite the same level as we used to. But we do use the Fridays of a grand prix as a test session, as well as for preparation for the rest of the weekend.

Is tyres the one area where you really feel the lack of testing, as we have seen some unusual situations on the tyre side so far this year?
Some of what we have seen with tyres this season has been very circuit and temperature specific. If your tests are not at the circuits you race on, or at the temperatures you encounter at the race weekend, then the problems with the tyres might not necessarily show up.

Leaving aside the Brawns, who do you expect to mount a serious challenge over the next few races?
I think anybody can. We saw McLaren and Renault make a big step forward at the Nuerburgring and we ourselves made a step forward at Silverstone. As teams introduce new packages, it's possible for them to make a good step forward – that has been a trademark of the season so far and may well continue to be so for the rest of the year.

At the moment, it seems likely that Red Bull Racing will have to persevere with development of this year's car right to the end of the season if it is in the fight for both titles. What effect will that have on the 2010 car?
It's a problem we face every year. Last year, research carried out on RB4 for the balance of last season had no application to the 2009 car because of the regulation change. That is not the case this year; development parts we find for RB5 will be applied to RB6 and possibly even vice versa as we start to research RB6.

Are you surprised to see where Red Bull Racing is now in the championship? Did you expect things to be going this well?
We made reasonable progress through the last couple of years which, for Red Bull Technology, culminated in the win at Monza last year. Then, with the big change in regulations, we had the opportunity to do something new and different and possibly steal a march on more established competitors. Last year, we continued to develop RB4 and TR3 fairly aggressively right through the summer. Other teams abandoned their 08 car somewhat earlier. Given our resources, that did stretch us quite thin last summer. We managed it as best we could and split up our development teams. We were probably one of the latest starters on the 09 car. We managed to find a few novel features that have helped to make the car competitive and from then on it's been a case of developing it.

On a personal note, you looked quite emotional standing on the Silverstone podium after the one-two finish in the British GP. How did that feel?
To be honest, the three months leading up to Silverstone had been very hard work, as we developed the car to adapt it to the double diffuser. So to see that, as a package, make the difference at Silverstone was a great feeling.