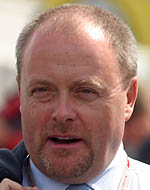 It is understood that a number of teams are on the verge of launching a formal complaint to the FIA with regards the chief steward's relationship with Manor, one of the three new teams due to make their F1 debut next season.

The Guardian reports that Jane Nottage, an associate director of Donnelly's company, Sovereign Strategy, is organizing Manor's public-relations strategy, though the paper stresses this is on a "pro-bono basis", while Donnelly (above right) escorted a senior Manor executive around the paddock at a recent grand prix in Europe.

This follows recent reports that the eight FOTA teams had written to the FIA asking for Donnelly be removed as chairman of the stewards, claiming that the role, together with his other role as official representative of the President of the FIA, represented a conflict of interest.

According to the Guardian, a close associate of Donnelly yesterday told the paper that he is well aware of his responsibilities as chair of the stewards and has "no direct involvement" in Manor. The associate further claimed that Donnelly had introduced Manor to the other teams after being asked to do so as a "well-connected figure in the paddock".

Donnelly, is a former Labour MEP for Tyne and Wear, who in 1997 became leader of the European Parliamentary Party. In 1999 he resigned. At the time there was concern at his involvement (as director) with Sovereign Strategy, a business consultancy employed to provide lobbying and representative services for the FIA.

Aside from Donnelly, the teams are also said to be concerned with the 'special relationship' between the FIA President and Manor's Technical Director, Nick Wirth, who in 1993 founded the Simtek Formula One Team... along with a certain Max Rufus Mosley.