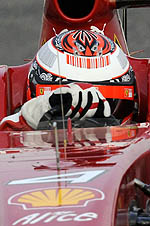 Ferrari's Kimi Raikkonen topped the timesheets on the second day of testing at the Circuit de Catalunya, even though a KERS related problem restricted the Italian team's running time.

The day started cloudy and the track was initially damp but the tarmac soon dried out and the sun came out shortly before lunchtime.

The Finn's planned programme consisted of a comparison of various set-up options at the start of the day, followed by a Grand Prix weekend simulation (qualifying and race.)

Unfortunately, the simulation came to a premature end, because of a problem with the KERS cooling system. Up to that point, the Finn had completed 55 laps, the quickest being a 1.20.314, which nevertheless turned out to be the fastest lap of the day.

"We had a problem with the KERS' cooling system and we preferred to stop and not risk greater damage," said Kimi, who will not drive the F60 in anger again until the Friday free practice session in Melbourne. "Until then everything went really well. I think that once we've resolved these small problems with the reliability, we can say that we've got a very good package available.

"Sure, I would have liked to make a second race simulation, after the one we've done at Bahrain in February," he admitted, "but it's better that some things happen during the tests and not at a GP."

Second quickest was Kazuki Nakajima who also had restricted track time. "We had some changes to make to the car over the course of the day so a bit of track time was lost in the garage making those revisions," admitted Dickie Stanford, "therefore we didn't get in as many laps as we'd have liked."

Third quickest was Rubens Barrichello, taking over testing responsibilities in the BGP 001 car from Jenson Button. Stepping back into an F1 car for the first time since the Brazilian Grand Prix, Barrichello began the day with an installation run to ensure he was comfortable with his position in the new chassis. Once achieved, the team's focus for the remainder of the day was to complete a series of long runs to enable the Brazilian to evaluate the balance of the car in race conditions.

Barrichello completed 111 laps over the day. Jenson Button will continue the programme tomorrow before his Brazilian teammate brings the test to a conclusion on Thursday.

"First of all I would like to thank everyone at Brackley for what has been achieved," said the Brazilian veteran. "After such a long wait for news on the team and for me to have to sit out the past four months, I am so pleased that we have a reliable and fast car straight out of the box. Secondly I am pleased with my physical condition which has enabled me to complete so many laps - 111 in total - on my first day of running. As we are playing catch-up, obviously the more mileage I can do before the first race the better. I am happy that we have got off to a good start here at our first test and we just need to carry that through to the next test in Jerez and Melbourne."

Jarno Trulli was in the cockpit for Toyota again, working on set-up before long runs in the afternoon. The team also used the chance to do some pit stop practice.

"Today was my last day of testing for the winter," said the Italian. "Again, we did a lot of laps including some interesting long runs as we finalised our preparations for Melbourne. It's clear we will only find out the true picture in Australia but I'm happy with our work in the course of the tests we've done. The car has been competitive and consistent so we can head into the first race with confidence. I feel ready."

"This was another interesting and useful day," added Dieter Gass. "We did some long run evaluation and continued finalising our race preparations for Melbourne. Of course this was Jarno's last test day before then. He seems happy with the car's balance and we are happy with how it's going so it's looking good so far."

Red Bull's progress was hampered by two factors: the wet track at the start of the day and an electrical gremlin that took a while to find. Nevertheless, Mark Webber completed 66 laps, which is a race distance at this circuit and worked on final preparations for Melbourne, finalising car set-up and practicing starts.

BMW started the day with a race simulation. Nick Heidfeld completed a full race distance without any technical problems. To give the mechanics some valuable pre-season pit lane testing, the team also practiced several pit stops and even simulated a stop-and-go penalty.

After that the team concentrated on the set-up of the F1.09 and tried different aero solutions. At the end of the session Heidfeld did a couple of practice starts on the main straight.