Alonso goes quickest at a windy Jerez (with pictures) 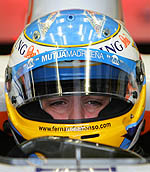 On the day that Renault warned it could withdraw from Formula One, it's highest paid employee, two-time World Champion Fernando Alonso, topped the timesheets at Jerez.

Once again, the French team made the most of the dry conditions to add mileage to the car and evaluate various new developments. Alonso also completed set-up work, although the windy conditions in the afternoon made for tricky track conditions.

"I'm very happy with the result from this test as we had two trouble-free days, a very consistent car and the work we have done has been very useful," said the Spaniard. "It was really windy today, especially from mid-morning onwards, which made it difficult to understand some of the set-up changes, but all the teams were in the same position and we were still able to learn some important things about the car. I would like to thank the team for all their hard work this week as I know they have worked very hard to make sure we could do everything we needed to."

"We had a good day," added Christian Silk, "and it was a really positive way to end the test. It's been a tough week for the mechanics who have had to work really hard, just as the guys back at the factory have done to get everything out here for this test. We've shown excellent reliability, got good miles on the car and done some good set-up work, which has set us up nicely for our test next week in Barcelona."

Kimi Raikkonen was on duty for Ferrari, the Finnish driver working on set-up and reliability. The Finn began work early in the day, when the skies were overcast and a gusty wind was blowing. After the lunch-break, there was a problem with the hydraulic system that took the mechanics quite a while to fix. Once it was sorted, Raikkonen went back on track, doing four runs and a pit stop practice.

Michael Schumacher, who arrived in Jerez yesterday, watched the session from the garage.

Today's work for Nick Heidfeld started with the mechanical set-up of the BMW F1.09. He also did a so-called 'run-out of fuel run' which resulted in him stopping out on the track. This standard procedure allows the engineers to compare telemetry readings with the car's actual fuel level. After the lunch break the German's main focus switched to tyres and brakes. He also did a couple of race start simulations completing a total of 99 laps.

"The strong wind affected today's work a little bit," said Heidfeld. "Nevertheless I was able to work with various tyre compounds and try a lot of different solutions for the car's set-up. That gives me a good base to work on tomorrow."

It it was a busy session for Jarno Trulli, who spent the morning doing set-up work before long runs in the afternoon. The Italian will return tomorrow for the last day of the test.

"That was a difficult day for us because our programme was disrupted," admitted the Italian. "The main problem throughout the day was the wind. It was gusting and making it hard to make the comparisons we were looking for. We did set-up work in the morning and we attempted a race distance in the afternoon until we had a problem with the fuel rig. We still put in a lot of laps and we put in our best lap later than most teams in the day. So we can be optimistic about that but overall today was hard work."

"Today was another productive day though the strong wind in the afternoon made it difficult to put in any meaningful running," added Dieter Gass. "We had planned a race simulation but it was interrupted by a fuel rig problem so we had to come back into the garage to refuel. Instead, we used the time to put mileage on the engine and different car components. Overall we're still happy with the progress we're making. Tomorrow we will do a 2010 tyre test if the weather permits so now we can look forward to our final test in Barcelona next week."

Mark Webber completed a good number of laps with Red Bull RB5 running reliably throughout. On the agenda, a general pre-Melbourne development programme, with lots of items ticked off the job sheet come the end of the day.

The Australian continues driving tomorrow when, on the final day of this five day test, the team will evaluate some Bridgestone tyres aimed at the 2010 season.

Kazuki Nakajima was on duty for Williams, the Japanese youngster completing 83 laps on the way to posting a best time 1.003s off Alonso's pace.

"We spent all day working on set-up, combined with aero and mechanical part testing," said Sam Michael. "In addition, we also carried out some starts testing. Overall, it was a productive day during which we gathered a lot of data. Kazuki was driving today and will finish the week off for us tomorrow."

For McLaren, Lewis Hamilton returned to the cockpit to continue the development and set-up programme that had been successfully started at the previous Jerez test.