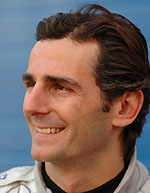 McLaren test driver Pedro de la Rosa has expressed concern that the new rules restricting testing during the course of the season will have an impact on drivers, affecting both race-fitness and even safety.

"I'm hoping I can test again in the next few weeks," the Spaniard said yesterday at Jerez, according to the Guardian, "because to me it's very important to arrive in Melbourne with as many miles as possible. Otherwise, the situation for a reserve driver is ridiculous.

"Arriving in Melbourne with very little mileage done or not having a single day of testing during the season just makes the test driver rusty in case we have to climb into the car," he continued. "And we could be a problem in the safety aspect if you haven't driven enough."

The Spanish veteran famously stepped into the breach for the Woking team at Bahrain in 2005 when Juan Pablo Montoya injured his shoulder playing tennis, and again for the second half of the 2006 when the Colombia parted ways with the British team.

"When I raced in Bahrain I had done a lot of miles," said de la Rosa yesterday. "The only thing I was not used to was to take a start, but this year the situation would be very different if I have to replace a driver mid-season, because I will have been four or five months without having driven an F1 car, with the problems that brings to the rest."

The test ban has been introduced as part of the drive to cut costs, however, other than the fact that money will be saved courtesy of the (test) personnel being laid off, the Spaniard believes the rules will have little financial impact as teams will simply do their testing in their factories.

"I think that testing is the cheapest way to develop a car," said the former Arrows and Jaguar racer. "That's my opinion. But I don't think that's possible."