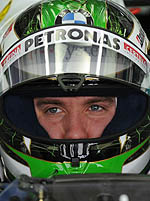 BMW's Nick Heidfeld topped the timesheets on the final day of testing at Jerez, however, difficult weather conditions meant there was limited running.

In the morning, on a damp track, Heidfeld took the opportunity to work on the car's set-up on wet tyres. Although later in the day the track dried out quickly, gusty winds prevented any useful aerodynamic work. Instead BMW concentrated on the mechanical set-up of the car. Heidfeld's 123 laps brought the mileage to a total of 1,728 kms (plus 209 kms on 2010 tyres) for the Jerez test.

"The ever changing weather made it quite difficult to do continuous work during the test," admitted Willy Rampf, BMW's Technical Coordinator. "Nevertheless we achieved the main targets of our development programme. Basically we concentrated on set-up work and evaluation of new components.

"Running the F1.09 for the first time in full wet conditions was a valuable experience as well. In addition on one of the days we had the chance to test the 2010 specification tyres. Now we will have a busy weekend working out the programme for the last pre-season test in Barcelona next week. Then we will also have a complete race simulation and pit-stop practice on the schedule."

Ferrari, who had Kimi Raikkonen on duty, worked on engine and gearbox reliability, evaluated tyres and development of some aerodynamic components, as well as carrying out some practice pit stops, including refuelling.

"Today, we were able to compare various set-ups aimed at the tyres," said the Finn. "One of the novelties for this year, compared to last season is that I have a good feeling on the slick tyres. I think the teams all seem very closely matched and this makes me think that the coming season will be particularly close."

McLaren's programme started with the controlled on-track draining of the tank to assess the effectiveness of MP4-24's fuel collection. For the remainder of the day, the Woking team worked on tuning the car's set-up before the session ended prematurely at 15:30 when a sudden gust of wind swept Hamilton off the track and into a tyre barrier. While the impact was only a mere 44km/h, the car went in backwards, doing enough to dislodge the rear wing and damage the car's rear-end.

With insufficient time to effect repairs before the end of the session, the team opted to finish early in order to commence preparations for next week's four-day test at Barcelona.

According to the Milton Keynes outfit; this has been a reasonably productive week, with Vettel and Webber racking up around two thousand kilometres, despite the poor weather.

"We finished our five day test with Kazuki running through the 2010 tyre programme for Bridgestone," said Sam Michael. "The tyres are designed to run without blankets, while the fronts will also be narrower than this year's.

"Overall, we've had a productive week," he continued, "evaluating aerodynamic components and mechanical set-ups, as well as putting valuable mileage on engines and transmissions to be ready for Melbourne. Although we have not completed our programme fully, the Toyota engine's durability (with the new, longer life regulations) has been extremely impressive."

Toyota completed its week's testing with an afternoon of work on the new slick tyres for 2010. Jarno Trulli was at the wheel of the TF109 as the team began collecting data for next season, however, the test was brought to an early close when he suffered some damage to his front wing after running over the kerbs midway through the afternoon.

"That was a short day for us," said Trulli. "We lost the morning to the weather but in the afternoon we had a chance to try out the 2010 Bridgestone slick tyres. The conditions remained difficult because the wind was still strong. On one run I picked up some damage to the front wing after running over kerbs. Still, we made it through a number of runs and collected data for the future. As for this season, this test shows that things are going well for us so we can be confident."

"This morning's wet weather meant we had to play a waiting game before starting today's test of the 2010 tyres," added Gerd Pfeiffer. "But the track dried out at lunch and we put in several runs of comparison for next year, when tyre warmers are banned. Overall this week has gone very well. We have been reliable and shown good pace so now we can look forward to our last test of the winter, starting on Monday in Barcelona."