Hamilton's 2008 hopes "under threat" according to British tabloid 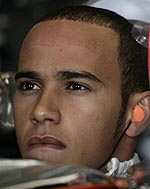 According to a British tabloid, the FIA has already begun its investigation into McLaren's 2008 contender, having "raided" the Woking outfit's HQ for "new evidence of cheating".

The paper, which claims that McLaren "tried to keep the search a secret" and now faces "an anxious wait ahead of the World Motor Sport Council meeting in Monaco on December 7", says that the FIA's investigation leaves "Lewis (Hamilton's)' 2008 drive under threat".

According to the report, Hamilton's drive is "under threat" because Ron Dennis is "out of touch he is with the inner workings of his own team", thereby "leaving McLaren vulnerable to sanction for the dishonesty of other senior staff".

On the front page of the same issue of the Daily Mail, the lead stories relate to the line-up for the latest series of 'I'm A Celebrity Get Me Out Of Year', and a report on a mother who sent a stripper to her schoolboy son's classroom as a birthday treat.