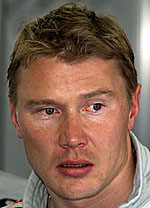 Two-time World Champion Mika Hakkinen has revealed that he has retired from motorsport, the announcement coming at Mercedes Stars & Cars Day in Stuttgart.

Today, the popular Finn declared the end of his career as a professional race driver. He said goodbye to his supporters with parade laps in the original McLaren-Mercedes MP4-13 with which he became the 1998 World Champion.

"The decision to retire now was not an easy one," said the Finn, " however, with 39 years, it's about time to say goodbye to professional motor racing. Of course, racing is still in my blood and this decision does not mean that this will prevent me from racing for pleasure.

"I leave with mixed emotions," he continued. "On the one side, it is hard to say 'Auf Wiedersehen' to the many friends I found in motor sport and particularly in the Mercedes-Benz motor sport family. Together with Norbert Haug and the brand with the star I have celebrated all my successes in Formula 1 and DTM here and this makes me very proud. On the other side I am glad to remain closely associated to the brand Mercedes-Benz. We agreed on a long-term co-operation and we will announce more details in due course."

In an F1 career which spanned eleven seasons, and two years with Lotus, Hakkinen participated in 162 Grands Prix, winning twenty of them. His last F1 victory was at Indinapolis in 2001, his penultimate race.

"I'm really sad about Mika's retirement," said Mercedes Motorsport boss Norbert Haug, "we all will miss him as a race driver. In Formula 1 and DTM together he drove almost 200 races for Mercedes-Benz, but he will remain with us a a brand ambassador and this is important.