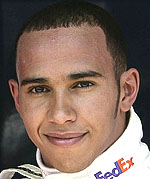 Stevenage Borough Council is to pay tribute to 'home boy' Lewis Hamilton by naming a street after the rookie sensation.

The move is in respect of the 22-year-old's amazing debut season in F1, when, having led the championship for much of the year, he was finally beaten by Ferrari's Kimi Raikkonen by just one point, though that result is still under appeal.

"The success of Lewis has given everyone in Stevenage a real boost," council leader Sharon Taylor told the BBC. "Everyone in the town is enormously proud of the fact that Lewis comes from Stevenage.

"In particular, our young people see him as a role model and his achievements have definitely raised their aspiration levels," she added. "He has really helped to put the town on the map."

The council has yet to confirm which street will be named after Hamilton, though it is understood that the new town centre development is one of the locations under consideration.