Theissen confident that 'green F1' can still be exciting 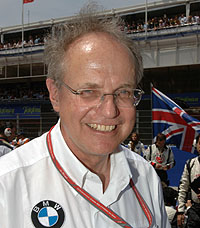 BMW team boss Mario Theissen is confident that the green proposals for F1 won't damage the sport, and that F1 will continue to be exciting as well as environmentally friendly.

"There are many open questions and issues to be solved," Theissen told Reuters, referring to the technical changes planned from 2011, "but generally we think it's a positive move. The ambition to pioneer road car-relevant technology through Formula One will be beneficial to the role it plays and the positioning of Formula One.

"As a technology frontrunner, BMW is happy about such a course," he added.

"The difficult issue is to keep costs under control," he admitted, "and it will be important to make sure that really only road car-relevant technology will be put into the regulations in order to have this technology transfer and pioneering role. We need enough lead time to do the job with the resources currently available.

With fans concerned that the proposed 2.2 litre, 6 cylinder powerplants will further damage F1's standing as the pinnacle of motorsport, especially with engines running on biofuel and revving no higher than 10,000 rpm, Theissen said: "I remember back in the turbo times, we had only a four cylinder engine, only 1.5 litres and only about 11,000 rpm but still more than 1,000 horsepower and it was so exciting. So it's not just about engine speed. Maybe it will be about power again instead of revs.

"Generally we support going in this direction," he added. "But, again, it requires careful discussion because biofuel only makes sense if it's from regenerative resources and if these resources are available in a quantity which is relevant to road car fuelling as well."

The German ruled out diesel powered F1 cars, even though Audi has achieved success at Le Mans.

We hear whispers that several teams are from happy with the proposals, but then again the teams haven't been consulted, just the manufacturers.

And while Mario Theissen is giving the proposals the thumbs up it's worth noting that the chairman of the Formula One Manufacturers' Advisory Commission, which submitted the proposal, is none other than Burkhard Göschel (right), former development director at BMW AG and now a consultant to the BMW board of directors.