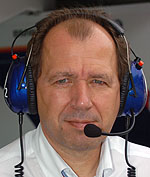 The Monaco Grand Prix not only rates as the classic race of the Formula One calendar, but also represents a unique test for the drivers and engineers. Willy Rampf, Technical Director of the BMW Sauber F1 Team, explains how the team gears up for this challenge.

In what way does Monaco differ from other circuits?
Willy Rampf, Technical Director: Monaco produces the lowest average speeds of any race over the course of the year. There is no start-finish straight as such, which means top speed plays a very subordinate role. It's more or less a case of one corner following the next, and this highlights clear priorities.

What are the implications for the car's aerodynamics?
WR: We run maximum levels of downforce in Monaco. And that means using parts which generate a lot of downforce but also produce a large amount of drag. Downforce is everything here. You carry as much wing as possible and sometimes also use extra wing elements designed specially for this type of track – all, quite simply, because aerodynamic efficiency is not as important as on other circuits.

Will you be using new parts for the BMW Sauber F1.07?
WR: We have developed a new front wing generating maximum downforce, which we used for the first time – successfully – in Barcelona. We will modify this wing again for Monaco. Plus, we will be introducing totally new front brake ducts and modifications to the rear bodywork. In addition, we will also use for the first time a new power steering that provides more feedback to the drivers.

Did the supercomputer with Intel processors play a role in the development of these parts?
WR: Our supercomputer Albert2 generally plays an important role in aerodynamics development. A large number of parts are developed using computer-aided airflow simulation prior to testing in the wind tunnel. The work of the supercomputer is particularly prominent in the development of brake ducts. These are highly complex components which can only be optimised to a very limited degree in the wind tunnel, as the temperature of the brake discs cannot be simulated there.

Monaco has the tightest corners of any race circuit – does this require you to carry out modifications to the car?
WR: Monaco demands the heaviest steering manoeuvres of any track on the calendar, which is why we are using completely new front suspension components, i.e. new wishbones, push-rods and track rods.

What mechanical adjustments do you make to the car?
WR: In Monaco the drivers often tend to skirt over the kerbstones, so we raise the ground clearance of the cars slightly and use softer settings for the springs and dampers. That also benefits traction under acceleration out of the many low-speed corners. The circuit is also open to normal road traffic, of course, which means it is pretty dirty and offers low levels of grip as a result.

How does that impact on the tyres?
WR: In Monaco we will be using the softest-compound tyre Bridgestone has available, and keeping a handle on tyre wear is, therefore, critical. It is also important to find the right compromise when it comes to the traction control set-up, as this often comes into play through the many tight corners.

What is the situation as regards cooling for the brakes and engine?
WR: This circuit places heavy loads on the brakes, since the lack of long straights barely gives the brake discs any time to cool. As a result, the cars need large brake ducts. The modest average speeds mean that airflow through the radiator is also reduced and, to make things worse, running maximum downforce makes cooling less efficient. With the front wing set at such a steep angle, some of the air is diverted to the point where it does not flow into the radiator. Monaco never fails to present the engineers with a serious challenge.