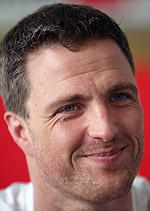 Was it good to return to racing in Europe?
Ralf Schumacher: It is good to be back in Europe because I think it is easier and better for us all when it comes to travelling. The three flyaway races at the start of the season are fine and we visit some good places but it involves a lot of travelling. In Europe it is a lot quicker to get to races.

You seemed to have a bit of trouble in second practice on Friday, did that affect your preparations?
RS: We had a mechanical problem early in the session and that cost us a bit of time while we put everything right. But we were still able to do pretty much all of our programme and we had a good session on Saturday morning so everything was all right in that respect.

What happened in qualifying?
RS: At the end of the third session I was held up by Nico Rosberg. He was on his out lap and driving quite slowly which cost me a lot of time at the end of my first flying lap and at the start of my second. It was a pity because that basically cost me the chance to improve. My fastest lap in qualifying was not representative of what we were capable of.

What could you have expected from qualifying without the traffic problems?
RS: I found grip hard to come by in practice and qualifying so the car was not perfect but I expected to get to final qualifying. My team-mate was able to qualify in the top six so that shows the potential of the package.

Can you explain what happened on the first lap in Spain?
RS: I actually got quite a good start and made up a couple of places. But because I started from 17th it got pretty messy on the first lap in the midfield as everyone battled for position. That is to be expected. Unfortunately I was hit from behind by Alex Wurz, which punctured my rear tyre and damaged my rear wing end plate.

How did your race go after that?
RS: Obviously I lost a lot of time in that incident but after that my race pace was actually quite okay. I made up a few places and I was catching the group in front of me when I had to retire. My front wing had worked loose so I was not able to continue.

Was it good to see your brother at a Grand Prix track again?
RS: It was strange to see him at a race but not out on the circuit! Of course it was good to see him but as he was in Spain on an official basis to do some work for Ferrari it was not easy to spend time together.

What do you think of the announcement that Valencia and Singapore will host Grands Prix next season?
RS: It's two more cities to visit! We know Valencia well from testing but the circuit will be new. It will be interesting to see how the street circuit works there. It's the first new European race for a while and I think it will be a good event. Spain is very excited about Formula 1 at the moment so I'm sure they will put on a good show. Singapore is a new location for Formula 1 so that is exciting. If it is good for Formula 1, I am happy to go there.

Has the single tyre regulation made life harder for the team this season?
RS: The current situation means the car has to suit the tyre which means there is more of a compromise. In the past we had different constructions of tyre available and this gave us the possibility to choose one which was suited to the characteristics of our car. But this is the same situation for everybody and we knew what to expect when we started testing with these tyres at the end of last year.