Symonds reflects on a tough season 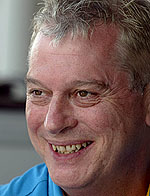 The Renault F1 Team's Executive Director of Engineering talks about the team's winning strategies from 2006.

Pat, how do you look back over the 2006 season?
Pat Symonds: To win a world title is always an honour for the people involved. But to do the same again the following year, with a double championship victory, is an achievement that really deserves recognition. It proves that the previous year's success was in no way lucky. These results are the consequence of a clearly-defined strategy, and unstinting work from the whole team.

How did your approach change from 2005 to 2006?
PS: Our only rivals this year were Ferrari, and they have always enjoyed exceptional reliability. So managing our lead, or going conservative, were never an option. We had to go on the offensive. We knew that the level of performance of the Ferrari was similar to our R26 and that most of the time, the differences came from differing tyre characteristics. There was no way of knowing, before the race weekend, if we would have the upper hand. And the balance of power between Michelin and Bridgestone could change literally overnight. That meant we needed to be adaptable in our approach.

You have said this season was among the toughest of your career. Why?
PS: First of all, the battle on track was tough. Really tough. Our rivals didn't seem to have any weaknesses, or almost none. We had to seize every little opportunity. And it was a difficult season politically as well. It was hard to come to terms with events like the mass damper affair and Fernando's penalty in Monza.

The team seemed to cope with the pressure though. How did you keep the motivation high?
PS: We worked very hard to keep everybody motivated. We explained the situation to them, and made sure everybody remained confident. They were already world champions, and there was no reason why they could not do it again.

Finally, if you could start the season again, what mistakes would you want to avoid?
PS: I would make sure we redesigned the wheel nut mechanism before Budapest, not afterwards! And I would not have changed Fernando's front tyres in China. Those two mistakes cost us two wins. But in terms of our approach, our philosophy and and how we went racing this year, I wouldn't change a thing.