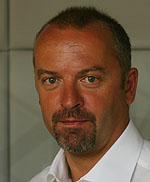 Today, Wednesday November 1 is a big day in the history of the Spyker team as Mike Gascoyne starts his new job as chief technical officer.

The former Tyrrell, Renault and Toyota man brings an enormous amount of experience to the task, and will play a key role in improving the team's level of performance in the future. It's also homecoming of sorts for Mike, who previously worked at Jordan, and was one of the main influences on that team's most competitive season in 1999. We asked him for his thoughts on his new challenge.

After you left Toyota you probably didn't expect to be back in F1 so soon. How do you feel about your new role with Spyker?
Mike Gascoyne: I think initially it's nice to have a break, and at first you think I don't want to do it again! But then you come out of that. It's in the blood, and over the months I made the decision that I wanted to come back. Then Spyker turned up and made the right offer with the right challenge.

How much were you influenced by the fact that you had been at Jordan, so you knew the Silverstone factory and a lot of the people?
MG: I think that was important, the fact that you know there are good people there, and you've got all the elements that you need to go forward. The key thing is do the Spyker people have realistic ambitions? And they certainly do. It's also a chance to enjoy your motor racing again. You'll always enjoy motor racing when you start getting good results!

Did you look at other options?
MG: There were other options, but none of them really got beyond the preliminary stage, because Spyker was the right option for me.

Would you have considered going back to a manufacturer team?
MG: No, I think the challenge for me was to come back to my roots, like Tyrrell and Jordan. The challenge was to come to a small team, and make it an efficient, close-knit group, and try and build it up.

Is it fair to say that when at a manufacturer team you're always going to be a small cog in a big organisation, and it's hard to get things done?
MG: Inevitably if you look at a team of 1000 people or a team of 200, lines of communication are going to be very different. But also your aspirations have to be different. You can't go and do what they can do. The top teams are looking to win races and win the World Championship, and that's not something we can sit here and say that we can do in three years. We can build up into becoming a big team, but your aspirations over the next couple years have to be different. Our aspirations are to start scoring points, and nick the odd podium when there's a race once or twice a year where everything gets mixed up.

There are other teams where there are several key technical people with slightly different roles. How will things work with technical director James Key?
MG: I obviously know James from when I was at Jordan before. I know the guy very well, and we get on well together. I said to him at Monza that it's really an opportunity for him to learn his trade without all the pressure, and I think he'll end up being a much better technical director in three years' time, because he'll have benefited from my influence and experience – very much as I did at Tyrrell with Harvey Postlethwaite, when I was deputy technical director. These days it's very hard for young guys to learn their trade as a technical director, because there's so much pressure. You can't hide at the back of the grid any more. So for James I think it's an ideal solution.

How will the workload be split between James and yourself?
MG: I'll take responsibility for all the technical decisions, but part of being a good manager is that you leave your guys free to do their jobs. I always use to describe how things worked with Harvey like this - he grew old and didn't want to run to 100 metres any more! He wanted a young guy to run it for him. But when you veered out of your lane he tapped you on the shoulder and said, That way, mate!' I think probably it's a similar type of role.

We know wind tunnels are your speciality. Is organising the programme one of your main tasks with Spyker?
MG: Obviously it's the key area of performance in any F1 team. If you're going to perform, that has to be working properly. We proved with Jordan in 1999 that we could design a car in that wind tunnel that was pretty good. We've got an update programme, and for sure it's going to be one of the priorities.

To what extent will you actually be involved with the car?
MG: I'll be in every design meeting, and I'll be making all the key designs decisions. But the new car is already pretty much finished as of November 1, so I think what we can do for the start of 2007 is fairly limited. The engine deal was finalised quite late, and I'm coming in even later, so you can't expect that we'll have gone anywhere by March next year. But what's important is no matter how much money you put into building the house, if you don't dig the foundations properly, it falls down. So you've got to do the basics right before you start changing the on-track performance.