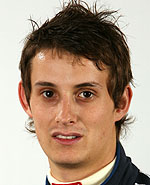 A1 Team Great Britain fields a new face come race day in Round 3 of the 2006-07 A1GP World Cup of Motorsport in Beijing, China next weekend, 10 – 12 November, with series rookie Oliver Jarvis taking the reigns of the British A1GP challenger.

The 22-year-old from Cambridgeshire is no stranger to the A1 Team GBR set-up having fulfilled driving duties in the rookie-only sessions on Friday's at the opening two rounds of this season's nation versus nation championship in Holland and the Czech Republic before handing over to Darren Manning and Robbie Kerr respectively to race in those events.

Now it's Jarvis' turn to represent the Union Jack in the heat of battle and with no-less accomplishments than the 2005 Formula Renault UK Championship and 2005 McLaren Autosport BRDC Young Driver of the Year Award to his credit, combined with a fantastic rookie effort in the 2006 British F3 Championship where he finished series runner-up, Oliver's talents now await the hot-bed of A1GP competition.

Oliver took time out to preview his A1GP race debut and give a little insight into his role as A1 Team Great Britain's 'rookie' racer!

After two rookie sessions how does it feel to be selected to race in China?
Oliver Jarvis: "Well it's obviously nice to know that the team thinks you've done a good enough job to merit getting the race seat. They're taking a little bit of a chance on me being the rookie of the three drivers but it's a fantastic feeling to know I'll be racing for A1 Team Great Britain next weekend in China and I hope to show them what I'm capable of."

What have you learned from your time in the rookie sessions in Holland and the Czech Republic?
OJ: "Fundamentally I've got to know the A1GP car a lot better as well as how the team works. In turn they've been able to see how I like to go about things in terms of set-up and how to get the best out of the car. The car's totally different from anything I've driven before so the rookie sessions have afforded me time to get used to its characteristics. It's been great getting to know and work with the team and I think those experiences will be put to good use in China."

How does the A1GP car differ to the cars you've raced in your career to-date?
OJ: "The A1GP car is certainly quite a bit quicker than anything I've raced so far. The 'power to grip' ratio is significant and it requires a slightly unique driving style but key to A1GP competition is to get the most out of a new set of tyres, not least in the aggregate qualifying system used to set the grid for the Sprint race."

What's the single biggest challenge facing you ahead of China?
OJ: "Well it really goes back to the one-lap qualifying system as I've never been involved in anything like it in any other championship. You really have to focus to get the best out of the car and of course yourself but you have to get all that done at the one time to really nail it in qualifying. Obviously the circuit's going to be completely new to me as well but that's the case for everyone."

What do you know about the track layout in Beijing and China's enthusiasm for A1GP?
OJ: "I've seen a bit of a mock-up of the circuit but nothing to really form too much of an opinion on. It looks like it'll be quite a short layout but like I said I haven't seen a final plan so it'll be new to all of us when we get there. That's probably a good thing as it will hopefully mean there's more of a level playing field as nobody has the advantage of track knowledge heading into Friday practice.

"From what I hear the Chinese have really got behind the A1GP concept and that's probably been helped more so since the new season began with A1 Team China getting off to a pretty decent start."

Have you raced on a street circuit before, would you have preferred to make your A1GP race debut at a permanent track?
OJ: "I've been fortunate enough to have raced at Pau in France in an F3 car. It really is a unique experience, you get really close to the walls and it's just a fantastic racing experience. I probably would have preferred to have made my A1GP debut on a normal circuit as street racing presents fairly unique challenges but I'm just really grateful for the opportunity to race for A1 Team Great Britain and I look forward to doing a solid job despite it potentially being a difficult first race."

What are your impressions of this season's A1GP Series?
OJ: "I think this season's it's really taken off and captured the imaginations of a lot more fans and sponsors. The concept is just fantastic, it's really grown since last season's inaugural competition and hopefully it will continue to flourish and become a very strong international championship for years to come.