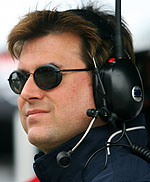 A1 Team USA stands seventh with 10 points after two rounds of the second A1GP season. Phil Giebler's second place in the feature race in the opening round at Zandvoort, The Netherlands, was the highest finish for Team USA and the driver from Oxnard, Calif., added one point by taking sixth in the sprint race at Brno, Czech Republic.

Rick Weidinger purchased the A1 Team USA franchise from A1GP two months prior to the start of the inaugural season in September, 2005. In this interview, Weidinger discusses a variety of subjects regarding Team USA and the A1GP series.

What are your expectations for A1 Team USA this season?
Rick Weidinger: In this sport, you have to expect to win every time those engines fire up no matter where you are positioned on the starting grid. Truly anything can and does happen in motor sports. Expect the unexpected. We have started the second season of A1GP well and fully expect to carry that momentum throughout our 12-race series. Our objective at A1 Team USA is to win the championship and create great partnerships and sponsors.

Phil Giebler drove in four races for A1 Team USA last season and you brought him back. Will he be your driver the entire season?
RW: The driver selection is a very interesting and unique element of this A1GP Series. Also unique is the fact that all cars have the same chassis and engine--equal equipment equals a level playing field. The important ingredient and relationship for success in A1 is the driver and race engineer. If you get that combination correct, there is a high probability you are going to do well. This is a team championship, so theoretically we could select a different driver for each race. Last season we engaged three different drivers and they all scored points for A1 Team USA. This year we tested Phil in September at Silverstone and he did very well. Phil and Greg Wheeler, our new engineer, have been very effective together. Phil has performed well in the first two races, so as long as he is happy and continues to perform there may be no need to change. We will see but Phil and I talk regularly about this selection process.

What attracted you to becoming an owner in A1GP?
RW: The level-playing field and business model. Having been a prior professional motor sports owner, it seems odd to discuss racing and business model in the same breath. However, I believe that A1GP--the World Cup of Motorsport--is the best product in racing and contains an achievable, viable business model. In my second season with A1, I have pretty much defined my racing costs going forward and the only variable cost is a function of our revenue growth. I have a chance of achieving eight different revenue sources on top of a defined business cost. Bottom-line, even before all the economics line up, the biggest attraction to me personally is the nations versus nations form of competition. I am fortunate enough to own a racing team that represents the United States of America all around the globe. We expect sponsors to be highly attracted to this product.

Will A1 Team USA enter the Indianapolis 500 again?
RW: We expect to. Again, we are preparing to put Al Unser Jr. together with GEICO--a winning combination that was very successful last May at the Indy although the box score did not show it. We met our A1 Team USA objective and surpassed GEICO's objective. Under promise and over deliver is what we like to do. We went from 27th to 9th place last Indy before the unfortunate event of debris from another car taking us out. Al truly feels as though he can win that race again and so do we.

What is the status of A1GP being on television in the United States this season?
RW: We are pleased to announce that the A1GP races will be broadcast on the Speed Channel this year. The people at Speed are great to work with and obviously have a tremendous understanding of motor sports and how to promote it on television. It's a major improvement from last year. People turn to Speed to watch worldwide racing. They can find us there. A1GP produces the telecast and they do a first-class job. It's a competitive, thrilling and enjoyable broadcast. There are at least 28 cameras around the track with multiple in-car cameras as well.

When will Speed begin broadcasting A1GP?
RW: Speed will begin broadcasting the A1GP races on Dec. 6, 2006. The first telecast will be the Zandvoort, The Netherlands race where Team USA finished second to Germany in the feature race. The broadcast will be weekly at 4 p.m. every Wednesday. By January, Speed Channel will be current with the A1GP race schedule. For example, they will broadcast the New Zealand race of Jan. 21 on Wednesday, Jan. 24. The invitations for my "Speed Channel" party on Dec. 6, 2006 will be going out soon!

What is the status of A1GP having a race next season in the USA?
RW: We are working hard for the approval of a street race in September 2007 in Washington, DC. We have a lot of heavy lifting to do; but it will be well worth the effort. This will be a world-class event in the nation's capital. The possible street courses we have looked at are amazing and I believe the demand for a nations versus nations motorsport event will be high.