Flag to flag win for Malaysia in Sprint Race 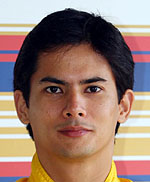 A1 Team Malaysia has secured a comprehensive lights–to–flag victory in the A1GP World Cup of Motorsport Sprint race at the Brno circuit in the Czech Republic. Canada, driven consistently by rookie James Hinchcliffe, came an impressive second, one second ahead of 2005/06 champions A1 Team France.

Malaysia's Alex Yoong edged ahead at the rolling start after polesitter New Zealand and second-placed Germany clashed before the first corner. Nico Hülkenberg roared away from the lights to pull even with Jonny Reid at the end of the pit straight, but Reid jinked to the left to take the racing line and nudged into the German car. The impact sent Hülkenberg wide onto the grass, into the barriers and retirement, while Reid picked up a left-rear puncture. The black car returned to the pits for inspection, but the damage was too extensive and Reid also retired from the race.

With a clear track ahead Yoong was able to pull out a one second advantage by the end of the first lap over A1 Team Canada, who had leapfrogged ahead of China at the start. France was the big winners away from the lights however, jumping from eighth to third by the second turn. Frenchman Nicolas Lapierre commented, "It was not an easy start, but thankfully I had a good one and was able to keep out of the trouble until the end."

Yoong continued to ease away from the field over the remaining nine laps to secure victory by 1.6secs. The ex-Formula 1 driver was delighted to seal his first victory of the year and the second A1GP win for Malaysia following their triumph in the Shanghai Sprint race last season, "I actually benefited from a slow start, which put me clear of the trouble. We've had a tough start to the new season and I'm delighted to bounce back here at Brno. As we don't have a rookie driver, we don't benefit from the extra track time in the Friday session, but the combination of my previous experience here and the team's incredible effort overcame this."

James Hinchcliffe kept out of trouble at the start and kept his nerve to finish his third-ever A1GP race in a fine second position. "I managed to stay clear of the acrobatics after the lights and carried on the momentum to the end. It's a phenomenal result in only our second event together. I only came here to do the rookie session but I'm proud to be able to race all weekend. This result is a real bonus."

Chinese driver Congfu Cheng had a steady race behind the frontrunners to finish a comfortable fourth, A1 Team China's highest A1GP finish so far, while A1 Team Czech Republic's Tomas Enge used his local knowledge to the full to secure fifth despite sustained pressure from the blue and red USA car. Last week's Sprint race winners South Africa were however unable to repeat their Zandvoort success when the master switch failed on the fourth lap, bringing Stephen Simpson's race to a premature end.

A1 Team Malaysia will now start the 28 lap Feature race on pole position. The grid for the race is determined by a unique points-scoring position that allocates points according to teams' finishing position, qualifying position and lap times in the Sprint race. One point is awarded to the winner, two to the runner-up, three to the third-placed finisher, running down to the 23rd classified finisher, who is awarded 23 points. The same points system is applied to the qualifying and fastest lap classifications. The points are added together; the driver with the lowest amount of points starts the Feature race on pole.

To check out our Brno Race Day gallery, click here