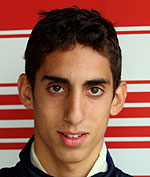 After scoring their first three points at the opening round of the 2006/2007 A1GP World Cup of Motorsport at Zandvoort, A1 Team Switzerland is looking forward to the challenge of the second round which will take place in Brno, Czech Republic on October 6-8. The 17-year old Swiss newcomer, Sebastien Buemi (right), will be at the wheel again over the weekend to continue his promising learning curve. Situated 16 km from the centre of Brno and 215km from the capital Prague, the initial layout of the Automotodrom Brno hosted its first official race in the 1930s before a few significant changes such as shortening the track and changing the direction were made after the Second World War. Motorcycle racing, Formula Junior, Formula 3 and especially Formula One races with Rindt and Lauda took place during this period. The last race on the old circuit layout was held in 1986 before the present 5.41-km track was completed in 1987.

With a mixture of undulations, fast corners and long straights, the circuit is considered by the driver as technical. Moreover, overtaking is facilitated thanks to numerous twists and turns. Changing weather conditions can be a frequent occurrence at Brno, making the racing there generally quite exciting.

Sebastien Buemi said: "I have already been to Brno when I was racing in Formula BMW in 2004 and 2005 and I have always finished on the podium. The track has characteristics adapted more for motorbikes than cars. It will be crucial to find the right set-up, especially as the track's surface is quite abrasive."

Max Welti, team principal, A1 Team Switzerland commented: "I am really looking forward to going to Brno as I have very fond memories of this circuit. However, having the first two races of the season with only one week's interval makes it very difficult from a logistic point of view, especially as we have a whole new Organisation. We will have to work very hard within the team and with our driver to be where we would like to be but as we have seen in Zandvoort, we could be not too far from our objectives. I am also very happy to continue working with Sebastien Buemi as he has proved in the first round to be a very talented young driver."