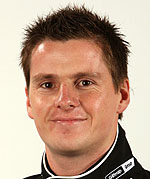 New Zealand driver Jonny Reid (right) is looking to make the most of a rare opportunity to drive in the A1GP World Cup of Motorsport this weekend.

Reid will be behind the wheel of Black Beauty during the second round in the Czech Republic – his first competitive A1GP drive for more than 11 months.

The 22-year-old drove in two of the four opening rounds in the inaugural season, but couldn't budge Matt Halliday from the driver's seat for any of the remaining seven rounds.

Now, with Halliday in Australia for the Bathurst 500, Reid is thrilled to have the chance to build on the form he showed in testing at Silverstone in August where he recorded the 3 rd fastest time of the two-day shakedown.

"I've been waiting for this opportunity since driving in Sydney in November of last year," Reid said. "It's such a buzz to be back in the car and I'm looking forward to doing my best for the team and my country. We are deadly determined to win races."

Reid isn't dwelling on his lack of track time, but he is motivated to prove his worth with a view to securing more starts.

"It's always difficult when you're a race car driver and chomping at the bit to do your job. You simply want to be driving.

"It's hard to accept you can't be in the car all the time, but you have to be a team player and support the team.

"I've been supportive to the best of my ability. Now I'm looking forward to doing my best in the car."

Reid has been competing in Formula 3 in Japan during the winter, a category he labels "tricky", but which he is certain has kept him sharp to be competitive in A1GP.

He also has the advantage of knowing the 14 corner 5.4 km Brno circuit in the south-eastern corner of the Czech Republic, having raced a Formula 3000 car there when competing in the 2004 Superfund European F3000 series.

"It's a real driver's circuit with a lot of elevation and it rewards drivers who attack the fast corners. It's my sort of place and I think we can go really well there."

Reid drove to the Czech Republic from the first round in the Netherlands, detouring to Nurburgring for a blat around the famous Nordschleife track, the former F1 circuit. Upon arrival at Brno, close to Vienna and Prague, the Aucklander had a jog around the circuit overnight and will walk the track with the team's engineer tomorrow.

"Being at the first round in Zandvoort with more than a hundred thousand raucous fans and then seeing the Brno track again has got the adrenalin flowing," Reid said.

"I'm confident after the testing sessions at Silverstone and I'm sure we'll be quick here, but it's never easy. One small mistake can cost you so much at this level."

Reid is sure the pit-stop problem in Zandvoort, when a jammed wheel nut dropped the team from pace-setter to also-ran, will be well and truly rectified.

"The jamming was a problem a lot of teams had last year and we were left ruing 'what might have been' after it happened to us on the weekend.

"But Super Nova Racing is an experienced team and they've been extremely professional in dealing with the aftermath. After the race the German and New Zealand mechanics got together and tried to nut out what happened and what could be done to ensure the issue was solved.

"I think the alliance between Germany and New Zealand will be an advantage for us both in the future."