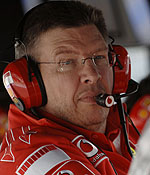 Ferrari's technical director Ross Brawn has dismissed fears that once Michelin withdraws from Formula One at the end of 2006, thereby forcing all teams to run on Bridgestones, teams already running on the Japanese rubber will have an advantage.

The most vocal of the critics has been Renault boss Flavio Briataore, who has called on the FIA to introduce slick tyres a year ahead of schedule, thereby ensuring that all the teams start 2007 on an equal basis. Otherwise, he fears Ferrari's relationship with Bridgestone, which has seen them win six successive Constructors' Championships and five Drivers' Championships, will give the Italian team an advantage. Briatore claims that a similar advantage would be enjoyed by the other teams currently using Bridgestone tyres.

Speaking in Monaco, Brawn said he expects Bridgestone to be able to supply all eleven teams without favouritism.

"I would suspect that Bridgestone will go back a step or two with the tyres because these tyres are quite expensive to produce," he told reporters. "There is very little incentive for Bridgestone to use the type of tyres we have now if they are the sole supplier.

"But I think that's entirely fair and proper," he added. "The situation we have coming in 2007 is because Michelin decided to withdraw from the sport. Those teams that are unhappy with the situation should go and complain to Michelin, they shouldn't talk to the rest of us."