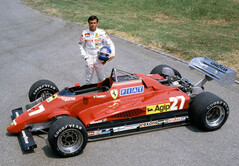 With his good looks and Gallic charm the Frenchman was widely described as the sport's Prince Charming.

Like Alain Prost, and numerous others, Tambay was a product of the Winfield Racing School and was the first winner of the Volant Elf competition which saw the victor given a full season in Formula Renault funded by Elf, subsequent winners included Didier Pironi in 1973 and Prost in 1976.

Runner-up in the 1975 European F2 Championship with March, he made his debut in F1 in 1977 at the French Grand Prix with Surtees but failed to qualify, and two weeks later switched to Teddy Yips' Theodore Racing with which he contested a further seven Grands Prix.

That same year he won the Can-Am championship driving for Carl Haas for whom he had previously driven in F5000.

For 1978 he joined McLaren where his best result was fourth at the Swedish Grand Prix. Retained by McLaren for 1979 the Frenchman failed to score a single point in a season which saw the British outfit score just 15 points over the course of the year.

Returning to Can-Am with Haas - no relation to the current team owned by Gene Haas - Tambay secured his second title in 1980 before returning to F1 in 1981 where he raced for both Yip and Guy Ligier's Equipe Talbot Gitanes.

However, it was in 1982 that Tambay was called on by Ferrari to replace his good friend Gilles Villeneuve who has been killed at Zolder. The pair had been close for many years, indeed, Tambay was godfather to Gilles' son, Jacques who was to win the F1 world championship in 1997.

Following the death of its legendary driver, Ferrari opted to contest the next couple of races with just one driver (Pironi) but at the Dutch Grand Prix Tambay was placed in the second car.

In only his second outing for the Scuderia he finished third while in Germany just weeks later he scored his maiden win, leading home Rene Arnoux and Keke Rosberg at Hockenheim.

However, for Ferrari there was little to celebrate for Didier Pironi, who had been leading the championship at that point and looked set to claim the title, was involved in a qualifying crash that ended his racing career.

After Hockenheim, Ferrari's season basically fell apart. Contesting the next two Grands Prix as the Scuderia's sole driver, Tambay was joined in Monza and Las Vegas by Mario Andretti and between them they just about managed to hold off McLaren in the team standings, the Frenchman missing two races due to feeling "unwell".

For 1983, Tambay was joined at Ferrari by Rene Arnoux. The first half of the season saw Tambay the stronger of the pair, the Frenchman claiming an emotional victory at Imola. However, in the second half of the year his teammate had the upper hand, and though they finished third (Arnoux) and fourth (Tambay) in the driver standings, it was enough to secure the Constructors' Championship for Ferrari for the second year running.

For 1984 Ferrari opted for Michele Alboreto, while Tambay headed to Renault where he spent two largely unsuccessful seasons before reuniting with Cal Haas in 1986.

Though he walked away from racing for a couple of years, he returned in 1989 to drive the iconic Jaguar XJR in SportsCars, including a fourth at Le Mans.

He continued to dabble and even tried the infamous Paris-Dakar, twice finishing in the top three.

After finally hanging up his helmet he followed the well-trod path of former racers to become a commentator and even served as deputy mayor of Le Cannet, a suburb of Cannes.

As recently as 2005 he was lured out of retirement to take part in the ill-fated Grand Prix Masters, returning the following year for the second and final season.

Though he never quite achieved the level of success he was surely capable of, Tambay had his moments, and was certainly considered one of the truly nice guys in the sport.

To his family, Pitpass, on behalf of its readers, offers its sincere condolences.