Binotto "relaxed" about future with Ferrari 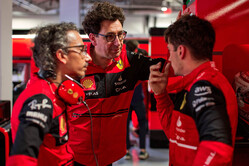 Following claims in the Italian media, Mattia Binotto insists he is "relaxed" about his future at Ferrari having had "open, frank and constructive" discussions with the team.

Currently looking to hold off Mercedes in the battle for runner-up, just a few races into the season the Italian team, and driver Charles Leclerc, appeared to have the edge.

However, as Red Bull quickly began to establish itself, the Maranello outfit suffered a series of issues including poor reliability, first lap retirements and poor strategic calls.

As a result, heading into the final race, the best the team can hope for is the runner-up spot in both championships, though neither is a forgone conclusion.

Fans of a certain vintage have seen it all before, but earlier this week the Italian media claimed that Binotto is to be fired and replaced by (Alfa Romeo boss) Frederic Vasseur.

Ferrari was quick to issue a statement denying the claim, however the rumours persist.

"Obviously Ferrari is the most loved team," the Italian told reporters. "Seb said once that everyone is a Ferrari fan, and if they are telling you it's not the case as matter of fact they are.

"When there is such a big passion around there is always certainly the passion but always as well a lot of criticism and rumours," he continued. "That has been true in the past. It's the situation right now and it will be in the future.

Pressed to categorically state that he will still be team boss next season, he replied: "Obviously, it's not down to me to decide, but I'm pretty relaxed.

"The reason why I'm relaxed is that I have always open, frank and constructive discussions with my bosses and my chairman," he continued, "not only on the short term, but the medium and the long term.

"More than that, I think if I look back at the season, yes, we had few up and downs, we are not the best yet, the fastest car on track but I think we achieved our main objective which was to be back, to be competitive in that new year of the 2022 cars.

"If I look at the way we started the season, I think no one in that room, not only in that room, would ever have imagined Ferrari to be so fast at the start of the season. That is proving that the team has worked very well through difficult moments as the 2020, 2021.

"We remain united," he added. "I think it's a team which is not only working well but has proved to be capable.

"Yes, there are still a lot of things that we need to progress. Weaknesses have been shown. But I'm pretty sure that as we did in the past, we will review, we will try to address them.

"The team back at the factory is fully focused on the 2023, trying to improve. Furthermore, I think this season has been outstanding in terms of pole positions, so qualifying pace, not as good in terms of race pace. We know that we need somehow to improve furthermore the race pace because then strategy or whatever is around it, is a lot easier if you've got a strong car in the race itself.

"So yes, I'm relaxed. I'm more than that, I'm really focused on what we need to do and concentrated with the team."

Check out our Saturday gallery from Yas Marina here.