Marko suggests that Vettel could replace him 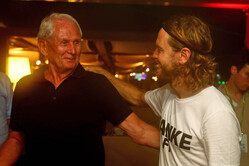 While some ponder Sebastian Vettel's possible return as an F1 driver, Helmut Marko believes the four-time world champion would be the ideal candidate to oversee Red Bull's racing operations.

Even as he was hanging up his helmet for the final time in Abu Dhabi there was widespread speculation over whether Sebastian Vettel might one day make a return to the grid.

While the German joked about a one-off return at Suzuka or replacing Lewis Hamilton in the Mercedes should he opt to retire sometime soon, he will be only too aware that comebacks rarely succeed.

Of course, Alain Prost returned and secured a final title as did Niki Lauda, but not so Vettel's all-time hero, Michael Schumacher.

While Vettel turned 35 in the summer, Red Bull's 'motorsport consultant' Helmut Marko is 80 in April, and the Austrian believes the four-time champion could make the perfect replacement.

"It's not out of the question he will come back in a top management position, Marko told Sky. "I'll be 80 soon, that would be something.

"We had a discussion," he revealed, "and I think if he could get a top management position, that might appeal to him. That's what emerged in the talk.

"For now we'll let him plant some trees and then we'll see what happens," he added. "He would certainly have the potential and he would have that personality for it.

"We have heard the message. We have two teams. We are open. But Sebastian, it's a serious difference as top management you have to be there earlier, leave later and you only get a fraction of the money you are used to as a driver."

Following the death of Dietrich Mateschitz, his son named the three men who will now manage the Red Bull empire, with Oliver Mintzlaff appointed CEO for projects and investments a role which includes overseeing the company's F1 operations.