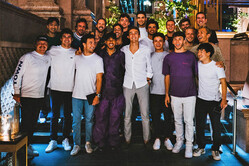 Alex Albon has rubbished claims that Lewis Hamilton picked up a bill for $140,000 after all 20 drivers met for dinner to celebrate the career of Sebastian Vettel.

While Hamilton did indeed pick up the bill, the Williams driver denies it came to anything like the $140,000 being claimed by sections of the media.

First off, with the dinner taking place on the eve of the Abu Dhabi Grand Prix weekend, there was no chance of drivers hitting the bar and ordering expensive bottles of Vino Collapso. Indeed, contrary to reports the get together did not take place at the notoriously expensive Salt Bae-owned Nusr-Et Steakhouse.

What a load of rubbish," Albon tells the latest edition of the official F1 website's F1 Nation podcast. "I saw that bill," he continued, referring to images published in the media, "that bill was from the Salt Bay guy where we didn't even eat. We ate in a place called Hakkasan.

"We had a set menu," he insisted. "There's a lot of people with dietary requirements, like obviously Lewis is vegan and all that kind of thing.

"The dinner was really special," he said. "It was a lot of fun. I think every driver, including myself, my cheeks were aching, just smiling and laughing the whole time so it was really good.

"I feel like I'll get in trouble to say who did what. There was a strict policy of the dinner itself. We can't say what happened. But there were some very good stories being told."