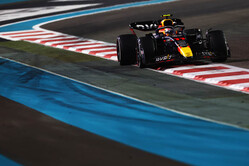 Missing out on the runner-up sport by 1.322s, Sergio Perez cites time lost behind Pierre Gasly as a contributory factor.

"I certainly lost a bit," said the Mexican at race end, "probably a second or so or more. It was clear it was blue flags but he was in a fight and it is really hard to give up the position.

Indeed, Gasly, who had made the strange, and ultimately pointless, decision to start the race on softs, was battling Alex Albon and Guanyu Zhou for 12th in the final stages of the race.

"I think he was thinking to go for the move but I ended up being there and I thought he left the door open so I went for it, luckily I could brake at the last minute otherwise there would have been contact.

"In normal conditions that certainly would be a penalty for Pierre," he insisted, "but it is the last race and I am just happy to go home, don't discuss anything, that's how it goes sometimes."

Other than Gasly, there were two other contributory factors, though the Mexican was only willing to talk about one of them; the decision to put him on a two-stop strategy while Charles Leclerc was on a one-stopper.

"Obviously when we look back, there were things we could have done better, like that middle stint," he admitted. "We were still thinking that we were on a one-stop at that point.

"Max was on a one-stop and we were on a two, so that middle stint wasn't ideal for us," he said. "I think that really caught us out a little bit and that really meant that we lost a few seconds there where we were behind Max. But that's how it is sometimes. Everything can be really close. But at the end of the day, I'm happy.

"I'm pleased because I gave it all, you know," he added. "Certainly there are some great, great days that we had during the season. We had great moments, great battling. I think I did struggle a bit with the tyres for this year, in terms of managing the tyres in the race. So, hopefully that can be something we improve for next year and generally just be a bit stronger.

"So, we can be pleased, I mean, to regroup altogether, you know, it's nice to finish this season and look forward for another strong year next year."

Of course, a little more help and team work from his teammate would have helped.