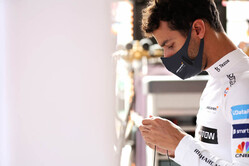 Helmut Marko has said that Daniel Ricciardo will return to Red Bull as the team's third driver.

The Austrian appeared to let the news slip while talking to Sky Germany, with neither Red Bull or the Australian driver officially commenting on the 'announcement'.

"Ricciardo will be our third driver," said Marko. "We have so many sponsors, we have to do show runs and the like, so of course he's one of the most high-profile and best-suited."

Of course, with the strict reduction on testing these days, as a development driver this means time spent in the simulator.

However, it is the stress Marko puts on "sponsors" and "show runs" that is interesting, for this is a role currently enjoyed by another former Red Bull racer, David Coulthard.

A fan favourite, Ricciardo would no doubt go down a storm at sponsor events but would this really enhance his chances of a return to a race seat in 2024, which is what the Australian is understood to be targeting.

Further complicating the issue is the fact that officially Liam Lawson has already been confirmed as the team's reserve driver for 2023.

On the other hand, following last weekend's events in Brazil, having Ricciardo on hand could help ease any friction involving the current line-up.

Check out our Friday gallery from Yas Marina here.