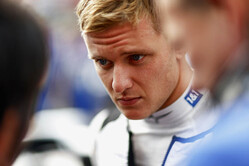 Mick Schumacher says there are only a few select people whose opinion he values... and Bernie Ecclestone isn't one of them.

In the build up to the Brazilian Grand Prix weekend, at a time Haas is understood to be dropping Mick Schumacher in favour of countryman Nico Hulkenberg, former F1 supremo, Bernie Ecclestone suggested the youngster look for a future outside F1.

"His name is his biggest burden," Ecclestone told German broadcaster RTL, "but he is trying to live up to it as best he can. And that's what brings him all the problems.

"That's why, I think he should forget about it and win in another category," he added.

True, being the son of arguably one of the greatest drivers to grace the sport, young Mick - named in honour of motorcycle legend Mick Doohan - hasn't had it easy.

Though his name certainly opened doors, the burden of his surname and the sense of expectation that accompanies it is much like being the likes of Frank Sinatra Jnr.

On his way to F1, Mick usually got the job done but was a notoriously slow starter taking a couple of seasons to build confidence.

He has had those two seasons at Haas but has failed to shine on a regular basis, while the number of incidents and crashes are almost the stuff of legend.

Told of Ecclestone's suggestion, the German youngster, who has been tipped for a reserve role at Mercedes, was in no mood to listen.

"Everyone always has an opinion on everything," he added. "I care about the opinions of the people I care about... of course my family, and a few other people from Formula 1. For example, Sebastian Vettel. Those are the opinions that matter to me."

It is expected that Haas could announce Hulkenberg as Kevin Magnussen's teammate for 2023 in the build up to this weekend's season finale in Abu Dhabi.