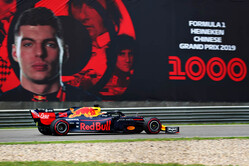 Following reports claiming that next year's Chinese Grand Prix is to be cancelled, F1 insists that no such decision has been made.

Last week the BBC reported that the event had been cancelled "as a result of the country's COVID policies", which led to the sport's powers that be concluding that the race could not go ahead.

According to the BBC, the main sticking point is that F1 personnel - and presumably those of the teams - would not be exempt from the strict quarantine requirements in the event of suffering infection.

Under the rules infected staff would be detained at an isolation centre for five days, followed by a further three at home and according to the BBC, F1 felt that it cannot "ask teams to go to the country with the risk that staff could be detained for days if they caught coronavirus".

However, a spokesperson for F1 insists that no such decision has been taken, telling France's AFP: “China has been included in the 2023 calendar and, until we announce otherwise, this remains the case.”

In recent days, China has witnessed protests in Shanghai, Beijing and, ironically, Wuhan, over the country's strict COVID restrictions which have seen some citizens suspected of being infected under lockdown in their homes for months while others are held in mass 'isolation centres'.

Indeed, the growing civil unrest in the country alone appears to be as big a threat to the race as the virus.