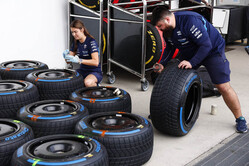 Pirelli has confirmed details of the tests that will take place over the winter as it develops its range of wet and slick tyres.

Over the last couple of seasons the Italian manufacturer has faced criticism of its tyres, especially the full wets, a situation not helped by the stark lack of testing. Indeed, next season's pre-season running is reduced to just three days.

In the wake of the Japanese Grand Prix, Pirelli came in for strong criticism, with the FIA subsequently admitting that "analysis of tyre performance in wet weather conditions is ongoing" between its technical department and Pirelli.

Prior to Suzuka, drivers had expressed a lack of confidence and performance in the full wets, consequently opting to use Inters whenever possible.

Consequently a number of tests will be held during the off-season, kicking off next week (3/4 December) when Alfa Romeo will be in action at Paul Ricard in what will be a wet test.

A further wet test takes place at Fiorano on 6/7 December with Ferrari on duty, while the following week (14/15) AlphaTauri conducts a dry test at Portimao.

There is no testing in January, but on 1/2 February Mercedes will conduct a two-day test of dry tyres at Paul Ricard, after which, at the same circuit, AlphaTauri will conduct a wet test.

The final test is planned for February 7/8, when Aston Martin will conduct a dry test at Jerez.

"We will work mainly on the intermediate and wets," confirmed Pirelli's chief F1 engineer, Simone Berra, "because for us it's the best period of the year to test in cold temperatures and in representative conditions. Then we will have even a couple of tests for the slicks for the new specification for 2024."

"We know that we have to improve especially the wet tyres in terms of warm-up and performance," added Mario Isola. "It is good to have some wet conditions in cold conditions as one target is to remove the blanket from the wet tyres in 2023, I hope the conditions are not too cold as maybe in Fiorano in December we find the snow!"

"In Portimao we are planning to do the slicks, but then it will depend on the weather conditions," admitted Berra. "If it's wet, then we will have some prototypes [of slick tyres] even there."

"When we have an opportunity, and we are finalising the test calendar also for 2023, we send an invitation to the teams to attend the test, then it is up to them whether they attend or not," said Isola, who revealed that not all the teams were interested in the tests.

"They cannot use the tests in February to develop the 2023 car," he added, "the FIA is sending an observer to each test to check parts and that the configuration of the car has been used at any of the 2022 races so they cannot develop new parts, wings, floors, or something like that."

The official pre-season test takes place in Bahrain on 23/24/25 February, a week before the first race of the season.