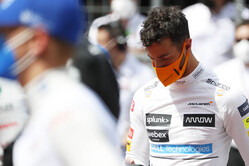 Daniel Ricciardo believes that a year away from the pressures of being on the F1 grid is the probably the best thing as he goes about his own re-set.

The Australian, who was dropped by McLaren in favour of rookie countryman Oscar Piastri, was this week announced as Red Bull's third driver.

Though it became clear early in the year that his days with McLaren were numbered, Zak Brown claiming the Australian hadn't "lived up to expectations", it wasn't until after the summer break that the decision to drop him was finally announced.

Though most assumed he would be eagerly snapped-up, most likely by Alpine, having spent two seasons with the French outfit, this proved not to be the case, and as the likes of Haas and Williams became the only viable options, or a move to another discipline, Ricciardo's future suddenly looked grim.

Performance-wise, McLaren's confirmation that he was to be dropped seemingly did little to inspire the Australian, and it is only now that he admits to having essentially lost his mojo.

Indeed, the popular Australian believes that had he continued to remain on the grid in 2023 there is every chance that he may not have rediscovered it and that a year away from the intense pressure will be the best thing for him.

"To make things crystal clear, I'm still not on the grid next year," he tells Speedcafe.com. "But look, it's certainly a way to still stay involved and to give me the time necessary to take a back step. And that's been no secret to myself.

"As the second half of the season went on, I just needed to step away for a bit," he admits, "rebuild myself, reset a bit, and also just find the intense love for it. Because, at this level, if you don't have that, then I'm not doing justice for myself or anyone around me. I'm not saying I've lost it, but I'm in fear of losing it.

"Obviously a race drive is the best thing if I want to stay, you know, that's the surest thing," he says. "It just became more and more clear that I couldn't be doing 24 races next year, it just wasn't going to, I think, be the right thing for me.

"I think it would have just probably worn me out more than anything," he admits, "and it's at a point where I just felt a little exhausted, where I just needed to slow my year down."

At Renault and McLaren, Ricciardo was one of the highest paid drivers on the grid, a proven race-winner and one of the true stars of the Netflix series that he brought the sport to a whole new generation of fans.

One would assume that a young man would savour being a key player in one of the most glamorous sports on the planet.

"It's a privilege," he agrees, "but it is also demanding. Yes, we are really good at what we do, but we're also still human and we still get tired, exhausted, fatigued. And at this level of sport, that is dangerous, you can't be operating at 99 percent, even. So I really felt I was in fear of not being at my best if I did another year.

"Obviously there was talks with other teams and I was like 'okay, if I'm not on the grid at least let me be aligned with a top team'.

"It's nice to be in a winning environment," he says of the Red Bull return, "I think you learn a lot. If there's not a seat with them, potentially they can help find a seat elsewhere.

"Also, being linked with a top team, a bit like Nyck de Vries was with Mercedes, you're living with a top team," he continues, "I feel like you're more, I don't want to use the word relevance, but you're kind of more recognised and less forgotten. So there's a lot of things."

Like most, the pandemic his Ricciardo hard, unable to return home to Australia left him feeling isolated.

"When you get to the top of your sport, you want to think that you're awesome, invincible, something really, really special," he says. "But I think the fact is that at some level, we're all still human and we all still feel a little bit of pain or sadness, or whatever it is... emotion.

"I certainly felt these things the last couple of years, going through the highs and lows, and then with COVID, not seeing friends and family as often.

"So it all kind of just builds up to a point where I was like 'okay, maybe it's best to just get a few things back in my life', a bit more family time, bit more friends, and a bit more time for myself as well.

"I'm not going to do every race," he confirms. "I still want that time to myself, but I will still be at some races, do some sim, listen and try to lend my experience and stuff and if I can help, sure, that's a great thing. If I can do any form of testing, that would be nice just to stay also car-fit.

"So it's kind of just being in enough where I'm still keeping up to date, so to speak, but then this is enough removed where it does give me that break. And I'm sure when I'm at the races watching I'll be envious I'm not on the track, so these things will probably feed me in a good way."

Anyone else not entirely convinced?