Desire to return to F1 hit Hulkenberg in the summer 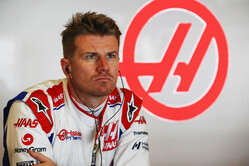 As he makes his return to the sport with Haas, Nico Hulkenberg admits that until the summer he wasn't that bothered about returning to the sport, but then things changed.

"After 2019 I was out and I was happy," he said, referring to when he left Renault after three seasons with the French team. "I had some distance and some breather from it.

"In 2021, nothing much happened," he continued, "and even at the beginning of this year I wasn't stressing or thinking about it too much.

"But then coming towards the summer, it somehow grew in me again," admits. "When I came and visited races, and saw the action and the excitement, I had the desire to come back. And then the discussions started."

Out of a job in 2020, he was called in by Racing Point to replace Sergio Perez at the British and Anniversary Grands Prix at Silverstone, when the Mexican tested positive for COVID and again at the Eifel Grand Prix when he stood in for Lance Stroll.

Failing to start the British Grand Prix a week later he finished 7th in the Anniversary race and 8th later in the year at the Nurburgring.

Though linked with a number of teams, as he admits, Hulkenberg wasn't that concerned about a full time return, and then, come the summer, it is understood he made the first move and contacted Guenther Steiner at Haas.

Steiner and Hulkenberg haven't always enjoyed the best of relationships of course, the Italian famously describing the German as a "childish bully" when he sought to have Kevin Magnussen's 5s time penalty increased after the Dane forced him off track in the latter stages of the 2017 Hungarian Grand Prix.

Hulkenberg subsequently approached Magnussen in the TV pen and sarcastically congratulated him on being "the most sporting driver on the grid", the Dane responding by inviting his rival to "suck my b***s".

Hardly the foundation for a good relationship.

"I expect to have a good relationship," insists Hulkenberg. "We've cleared that incident, we broke the ice at the beginning of this year actually. I said hello to him with the exact same words from 2017 and he felt that was quite funny and amusing.

"I have absolutely no worries working and racing alongside him. We're both grown-up adults, we respect each other. We'll race for the team. No problems whatsoever.

"It's not a no-brainer after three years out that I can come back," he said of his return. "I think only big names and world champions have achieved that in the past, so very happy and very proud about it.

"After three years out it's not like I had twenty offers on the table," he admits. "I've watched Haas, actually talked and negotiated in the years and years back with Guenther and Gene, so there was already some connection there.

"Like always it starts with a conversation, which was around summer time. I was chasing down and talking to Guenther to see if there is a possibility. With time, as we got closer to the end of the season, it got more intense and more serious, the discussions, and I think at the end of the day I wanted to come back racing, I wanted to be in a driving seat again, they wanted to have a change in the team, so our interests matched and here we are."

2022 saw a marked improvement from Haas, and Hulkenberg believes this lays the foundation for 2023.

"Last year, 2021, it was a tough year for Haas," he says. "They've been much stronger, much stronger results this year. But I see still potential that we can do better.

"That is obviously the job for me and Kevin and for the whole team to drive this team forward, and naturally you always want to do better the following year than the previous year of course. The journey starts together here, work and build the team together from here."