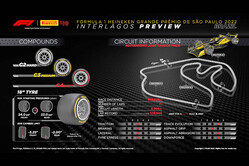 Interlagos will host the third and final F1 Sprint race of the season, after Imola and Spielberg. As a result, the Pirelli Pole Position Award will be given out on Friday after qualifying.

The Brazilian Grand Prix is well-known for plenty of overtaking and frequent appearances from the safety car. The weather is always another question mark, with torrential rain as well as high temperatures and sunshine seen in previous years.

The teams used varying strategies in 2021 but the drivers on the podium all stopped twice. Lewis Hamilton, the winner, finished the race on P Zero White hard ahead of Max Verstappen and Valtteri Bottas on the same compound.

Mario Isola: "Formula 1 heads to Interlagos next weekend: the shortest lap of the year after Monaco and Mexico. It's a historic track run anti-clockwise, which alternates some quick sections as well as medium-speed sequences of corners, such as the famous ‘Senna esses'.

"There aren't any big demands on the tyres in terms of traction and braking because it's a very flowing layout, and the lack of slow corners means that the teams are able to control the degradation on the rear tyres.

"Brazil will host the "Sprint" also this year, the last of the season, and it will be particularly interesting with this car package to see what will happen on the track and, once again, the key role of the different strategies that can be used: in 2021 the grid on Saturday was equally split between drivers starting on the medium and the soft tyres.

"Despite the short length of the track, there's normally plenty of overtaking. Just think of Lewis Hamilton who was the protagonist of a comeback that brought him to victory from 10th place, using a two-stop strategy. So the new generation of cars and tyres seems set to provide us with another thrilling race this year."